In Salzburg, a public sculpture garden brings together various works by internationally renowned artists. The “Walk of Modern Art” is on permanent loan from the Würth Collection. Find out here which work of art has turned into a landmark for the city of Mozart and the Salzburg Festival.

Anselm Kiefer, Stephan Balkenhol, Marina Abramovic, Erwin Wurm: The “Walk of Modern Art” in Salzburg, on permanent loan from the Würth Collection in the city of Mozart, brings together sculptures by renowned artists. An artistic stroll.

When one thinks of Salzburg, one usually thinks of Mozart balls and open-air festivals, the Getreidegasse shopping street or Hellbrunn Palace. But there is another attraction waiting to be discovered in the city center: the “Walk of Modern Art”, a circuit of sculptures with 14 works by acclaimed contemporary artists. “The Language of the Birds” by Anselm Kiefer, a four-meter-high pair of wings, has been drawing attention since April 2019 in the courtyard of Salzburg’s state parliament. The massive bronze figure is the latest addition to the “Walk of Modern Art”. Both Kiefer and Prof. Dr. h. c. mult. Reinhold Würth, Chairman of the Supervisory Board of the Würth Group’s Family Trusts, attended its unveiling. This is for good reason: In 2013, the Würth Collection took over the “Walk of Modern Art”, offering the circuit of sculptures to the City of Salzburg on permanent loan ever since. 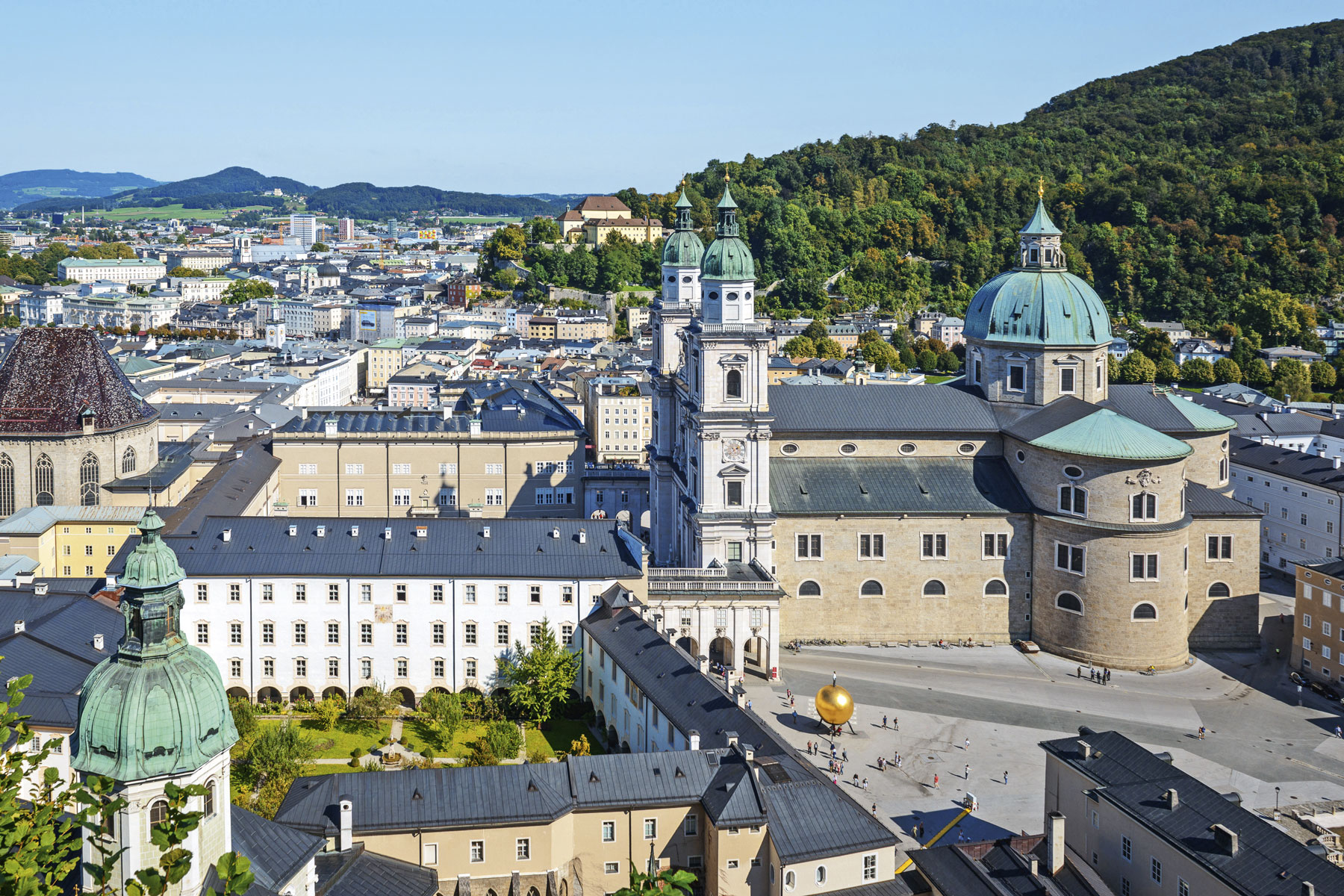 A MALE FIGURE STANDING ATOP A GOLDEN SPHERE, CREATED BY GERMAN SCULPTOR STEPHAN BALKENHOL, IS ONE OF THE MOST-PHOTOGRAPHED MOTIFS IN SALZBURG, 2007.

Reinhold Würth has always had a soft spot for Austria and its artists. The Würth Collection contains a total of more than 18,000 works of art, including what is arguably the largest collection of Austrian art from the 20th and 21st century outside of the Alpine country. The entrepreneur was granted Austrian citizenship in 2009, in addition to his German nationality. He has a permanent residence in Salzburg, where he attends the Salzburg Festival on a regular basis. His personal attachment to Austria is based on childhood experiences: “The very first time I traveled abroad, as far as I can remember, was a trip to Vienna with my parents in 1941. The splendor of Schönbrunn Palace left quite an impression on me as a small boy. I frequently traveled to Austria later on in life, on business and of course for the culture,” says Professor Würth.

AN ELEVEN-METER-LONG SCULPTURE BY AUSTRIAN SCULPTOR MANFRED WAKOLBINGER, WHOSE CURVED FORM ALLUDES TO THE RIVER RUNNING NEXT TO IT, 2011.

“I REGARD THE AREAS OF SALZBURG, NAPLES AND CONSTANTINOPLE AS THE MOST BEAUTIFUL ON EARTH.”
Alexander von Humboldt

Salzburg, the city of Mozart, is a very special place for many art-lovers and music enthusiasts all around the world, including Reinhold Würth, his wife Carmen and the entire Würth family. The “Walk of Modern Art” serves as a unique “open-air stage” for the Würth Collection. Making art and culture accessible to the public is a matter of great importance for the art patron.

The circuit of sculptures is the fruit of the ten-year “Salzburg Art Project”, an initiative of the Salzburg Foundation in cooperation with the Foundation for Art and Culture in Bonn. From 2002 to 2011, artists were successively invited to create their own individual artistic contribution to the project. In 2017, the “berliner block” was added in Mirabell Gardens by Georg Trieb, a German-Austrian artist living in Salzburg. 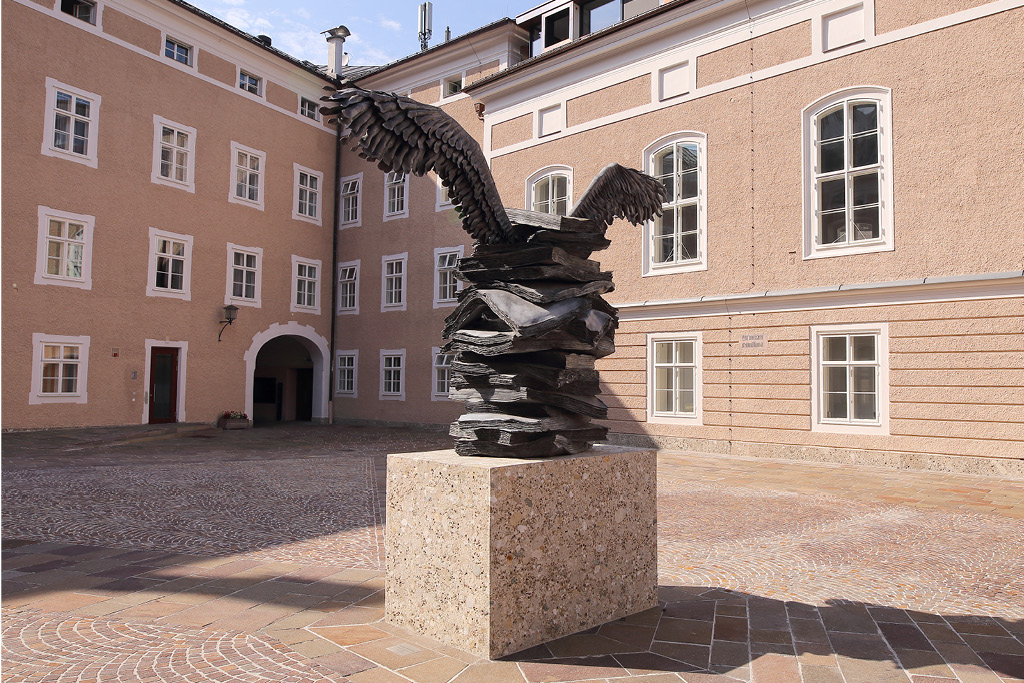 THE LANGUAGE OF THE BIRDS – BRONZE EAGLE WINGS SOAR OVER A PILE OF BOOKS: THE LATEST WORK IN THE WALK OF MODERN ART BY ANSELM KIEFER, 2019.

The 14 pieces in the “Walk of Modern Art” are spread out across the entire city center, and they are just as diverse as their makers. Some examples: Serbian artist Marina Abramovic, who became famous due to her spectacular performances, created an interactive sculpture named “Spirit of Mozart” out of an ensemble of stainless-steel chairs next to the Staatsbrücke bridge. A 15-meter-high chair is surrounded by eight other seats, which can be used by observers. They invite guests to linger and pause for a moment in the bustling city.

“Sphaera”, a sculpture by German sculptor Stephan Balkenhol on Kapitelplatz square, depicts a life-size male figure standing casually atop a two-ton golden sphere with a diameter of five meters. Measuring a total of nine meters in height including its pedestal and with its golden shine, the work can hardly be overseen. The 1.4-meter-tall female counterpart in Toscaninihof courtyard bears the name “Woman in the Rock”. “Sphaera” has since turned into a landmark for Salzburg and is one of the most-photographed Salzburg motifs on Instagram & Co. 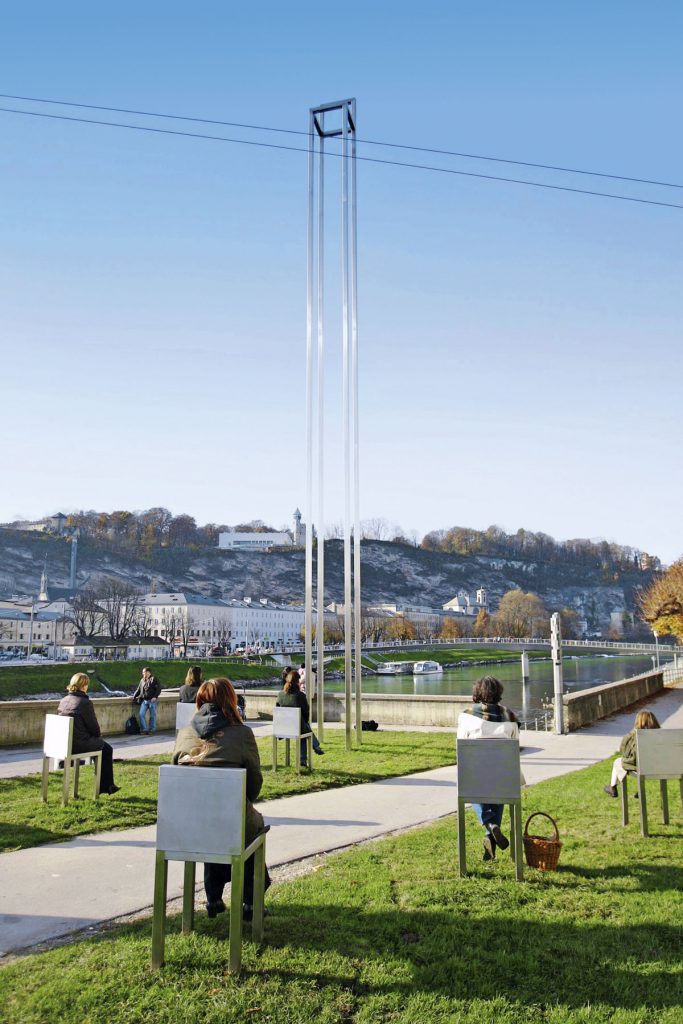 “I HOPE THAT IT WILL NOT BE NECESSARY FOR ME TO SAY THAT I CARE VERY LITTLE FOR SALZBURG AND NOT AT ALL FOR THE ARCHBISHOP. I SHIT ON BOTH OF THEM.“
Wolfang Amadeus Mozart

Initially, Erwin Wurm’s five green, human-sized “Gherkins” in Furtwängler Park were not met with much affection by the citizens of Salzburg. In his work, the Austrian artist elevates an everyday object into a work of art. Incidentally, he also likes to portray himself as a pickle. “What fascinates me the most about it is its simple form,” said the artist, known for his subtle sense of humor, in an interview.

Austrian artist Manfred Wakolbinger placed his eleven-meter-long sculpture “Connection” on a square next to Rudolfskai quay between the old city wall and the Salzach River, previously a barren site flanked by a busy road. Catalan artist Jaume Plensa chose for “Awilda”, an enormous marble head, the location Dietrichsruh, an enormous inner courtyard at the Salzburg Residence Palace—a meeting point for students from around the world. 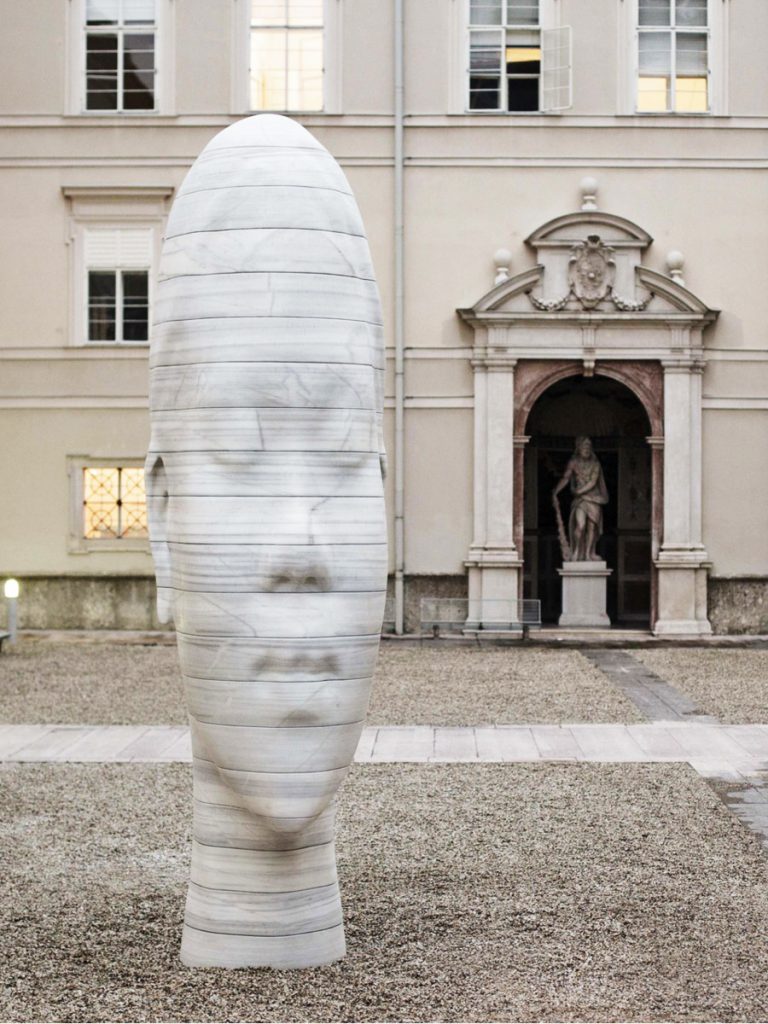 AWILDA – A MASSIVE HEAD MADE OF SPANISH MARBLE BY CATALAN ARTIST JAUME PLENSA, 2010.

The City of Salzburg greatly appreciates the permanent loan from the Würth Collection. “The Walk of Modern Art is a unique attraction for all visitors to the city. The 14 works of art are on the world stage, on the public stage, accessible to everyone, and provide new approaches to contemporary art in an almost playful manner,” says a delighted Herbert Brugger, Managing Director of Salzburg Tourismus GmbH, about the circuit of sculptures which has evolved into a tourist attraction.

Reinhold Würth was awarded the Ring of the Town of Salzburg in 2015 and the Decoration of the Land Salzburg in 2019 for his commitment: A symbol of gratitude to the patron of arts, who considers Salzburg to be his second home.


AUSTRIAN ART
IN THE WÜRTH COLLECTION

Aside from the “Walk of Modern Art”, there is more art from the Würth Collection to be seen in public spaces. In 2015, the Würth Sculpture Garden was opened at Arenberg Palace in Salzburg. The works of art in the palace gardens are open to the public and can be viewed daily from 8:00 a.m. to 6:00 p.m.

The Würth Collection cooperates regularly with Austrian museums and maintains close contact with Austrian artists. The exhibition “Siegfried Anzinger: A Look Backwards and Forwards” was on display at Museum Würth in Künzelsau in 2019.
In addition, Würth has been supporting the Salzburg Festival for decades as well as numerous individual projects in the fields of music, drama, and visual arts.