Claus Hassing often takes a dogsled to visit his customers. As Würth’s only sales representative in Greenland, he sometimes works at 20 degrees below zero. For him, this adventurous lifestyle is a true dream job.

He works amidst ice and snow at 20 degrees below zero. He does not even own any shorts or flip-flops, and he does not miss hot summers. Claus Hassing visits his customers by boat and plane. He is Würth’s sales representative for Greenland, the only one. It is his absolute dream job.

Barefoot, he shovels the snow in front of his wooden house: his brisk morning ritual at 20 degrees below zero. Then he drives two crates of brake cleaner to the new airport in Nuuk, so that the large machines building the new terminal work properly. Claus says: “Greenlanders are crazy about the wide variety of products at Würth.” 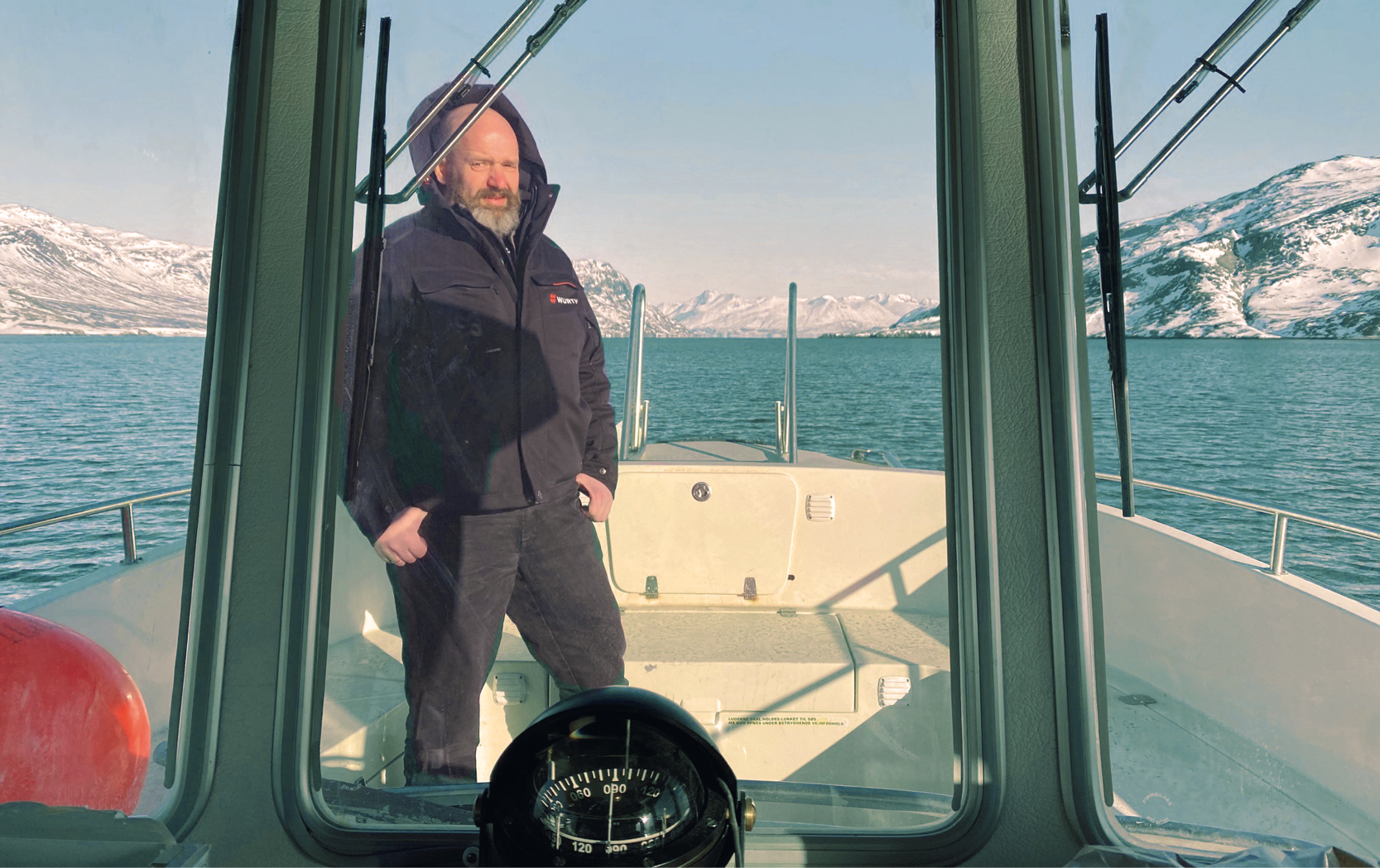 Claus drives a boat every day as naturally as we would ride a bike.

of the country is covered in ice: the second-largest ice body in the world, after the Antarctic ice sheet.

The sun never sets during this time and even shines at midnight.

inhabitants in 17 cities: only a few people live in Greenland. A person does not have as much space for themselves anywhere else.

Claus Hassing is the man in the ice: Würth’s only sales representative on the largest island in the world and an inhabitant of Nuuk, the smallest capital in the world. In order to visit his 200 customers, Claus usually takes a boat, plane, or helicopter. He works in the biting cold, and the nights are frequently longer than the days. Real summers with sweat, heat, and tanning are unheard of here. This also holds true for lightning-fast online orders, riding around in a taxi, ordering food for delivery, and darting out to pick up some fast food. For some this sounds like a life full of struggles and extremes, but for 59-year-old Claus Hassing it is the most beautiful and genuine life possible.

There is no doubt about it: Greenland is not suited for the faint-hearted. Before the Dane and his Russian wife Elena and daughter Irina started their adventure in Greenland, they lived for seven years in Kuwait and Iraq, where Claus repaired trucks for the US as a trained merchant. Temperatures there often reached 50 degrees in the summer, dropping to 20 degrees in the winter, and Claus shoveled desert sand instead of snow. “It doesn’t matter where you live, the most important thing anywhere is to see the glass half full.” This attitude seems to work. The man is in high spirits, brimming with strength and energy. 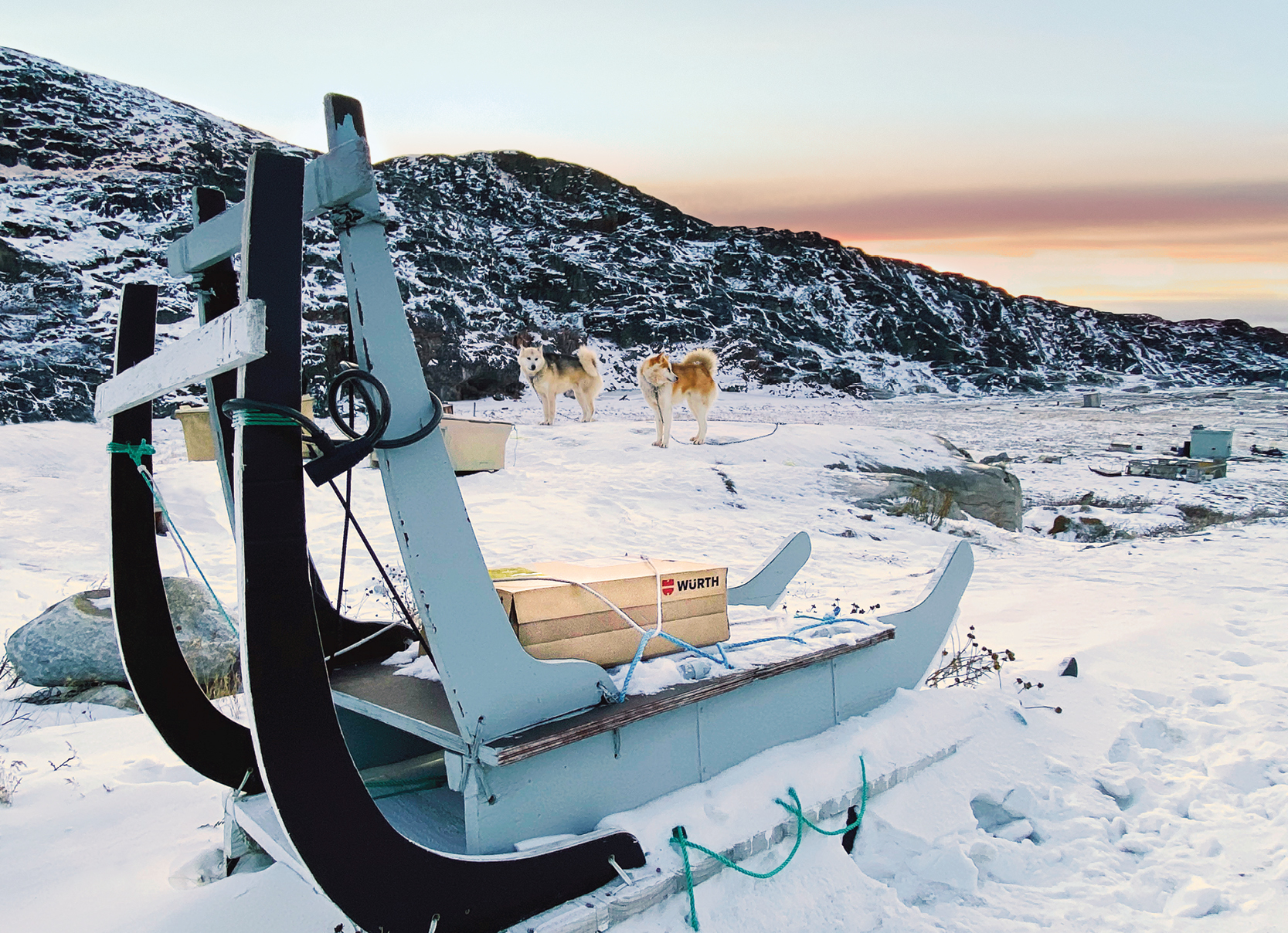 Dogsleds are a completely normal motor vehicle on the island. Except that the horsepower is not what counts in this case, but rather the dogpower.

“I LOVE MY DREAM JOB IN DREAMLAND,”

says Claus. He would not trade places with anyone for anything in the world. His sales territory stretches across 2.16 million square kilometers, six times larger than all of Germany. There are no streets, highways, or rails to link the towns and cities. The streets end at the city outskirts. “But it is not always possible to travel to the customers across the water or through the air,” says Claus. Everything depends on the weather, and on the people. At times it is the storms, frost, and fjords that dash his plans, while at others it is the snowy mountains and ice floes. “Nature triumphs over all technology and any type of artificial intelligence,” says Claus. And sometimes his customers simply have something better to do than work. Especially when nature itself offers something unique, unforgettable, and breathtaking. 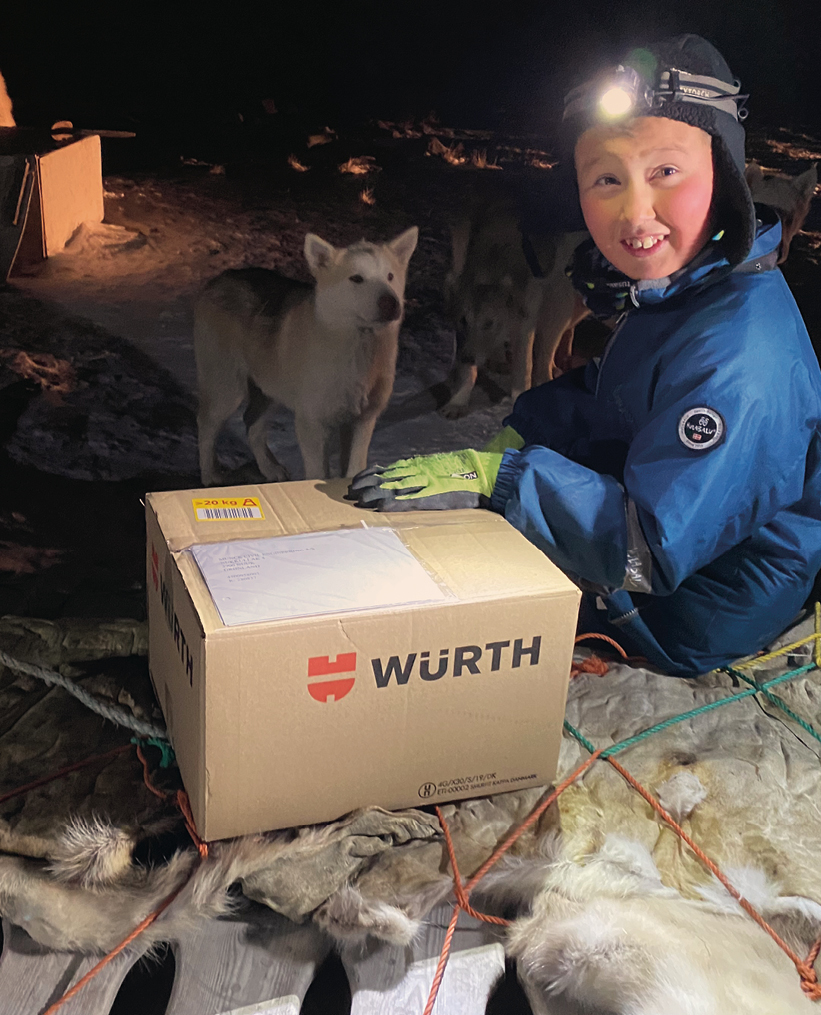 Nuunu, 11, is an exceptional musher and a friend of Claus.

He learned this in the summer of 2019 while he was still living in his home town of Frederikshavn. He was talking to a promising new car rental customer in Nuuk, in the west of Greenland. “Hello Jacob,” said Claus, “after my move in three weeks, I’d like to drop by and show you some products, alright?” Jacob replied: “Dear Claus, you need to remember one thing: Here we don’t make appointments three weeks in advance. You never know what might happen before then. Whales might pop up in the fjord, or musk oxen in the mountains. Or we might go mushing (dogsledding) across the tundra. That’s what really matters. That’s more important than doing business.” Three weeks later, Claus called Jacob again and said: “I’m close by and could be there in three minutes. Does that work for you?” – “Great,” he replied. “The coffee maker is already up and running, come on by.”

And because Greenlanders live in the now and focus on what is possible and necessary at that very moment, Claus is on call for his customers 24/7, 365 days a year. He solves most problems with ice scrapers for windshields, wind covers for high-rises, and grout for leaky windows. But the “heavy duty” headlights for trucks are also a bestseller.

The only thing Claus misses are trees, since there are none in Greenland. Otherwise, he has everything he needs. Not the self-evident comforts of the Western world: no taxis, online shopping, or burger joints. “Nobody would use them here,” he explains. The road infrastructure is not sufficient for taxis, and the speed limit is generally 30 km/h. Online retailers would need roughly four weeks to deliver their goods, and a pizza would be long since cold by the time it were delivered. What about burgers or French fries from a fast food restaurant? “Not a chance.” Home cooking is considered hygge in Greenland; providing food is a matter of honor.

CLAUS FISHES FOR HIS OWN FISH AND HUNTS ANIMALS HIMSELF.

Today he is serving salmon, tomorrow venison, and shrimp and musk ox on the weekend. He has never thought about doing yoga, visiting a spa, or going to therapy in his spare time. Air, water, and snow are his stress relievers, coves and mountains his focus trainers. And chatting with others is his antidepressant. Listening to them, understanding them, helping them, that is what gets Claus up in the morning, which is why he speaks seven languages. If he were not a Würth sales rep, he would be a sales rep for Greenland, a tour guide for dream vacations. 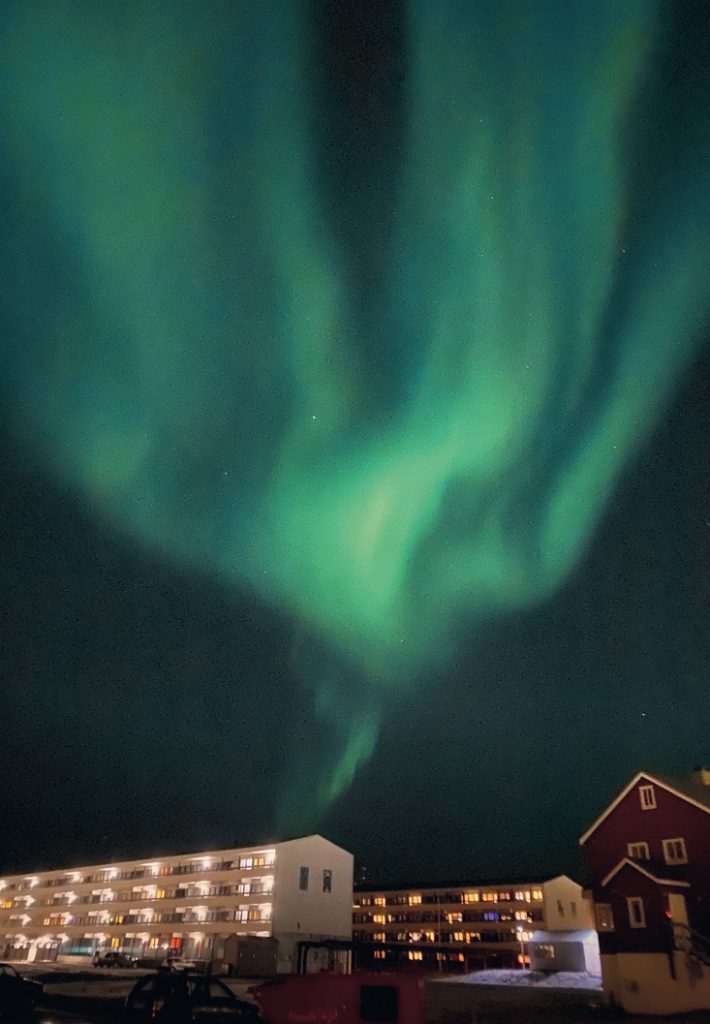 The Northern Lights are a fantastic phenomenon. Sometimes they wave across the sky in curtains of green, then yellow, red, or blue. 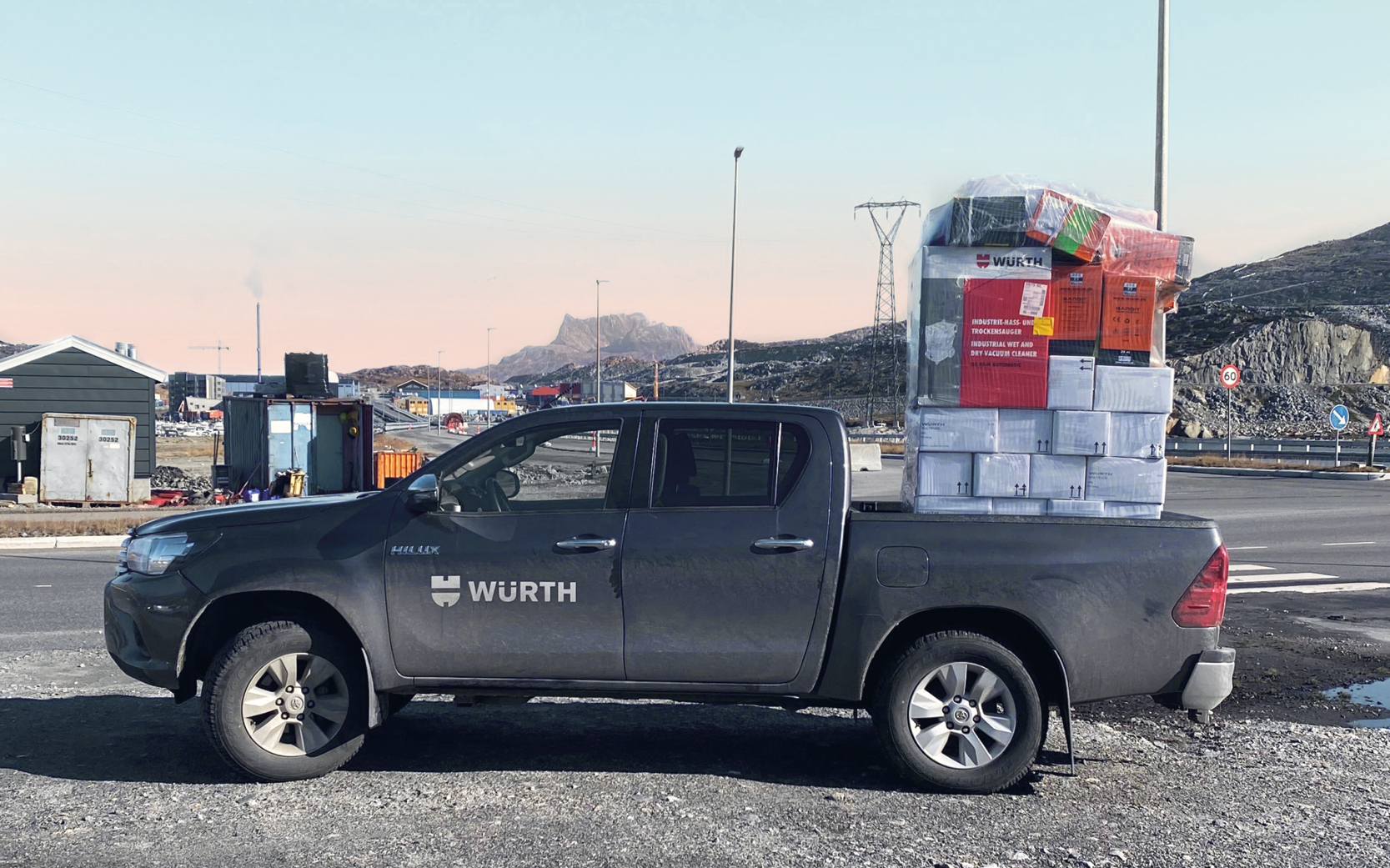 Claus can drive his Toyota pickup around on a road network of just 100 kilometers. 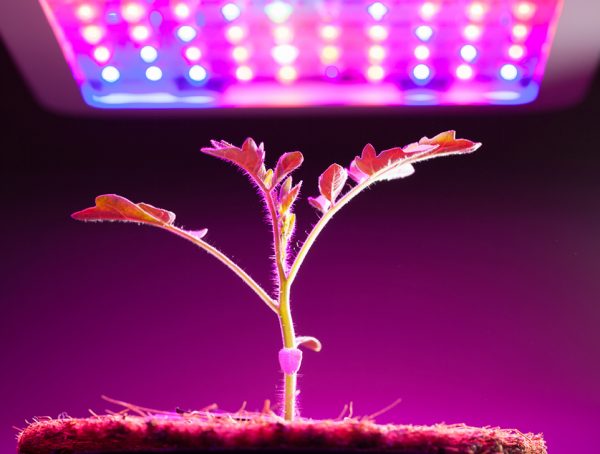