By the year 2050, the world population is projected to increase by a fourth. Greenhouses could play an increasingly important role in growing food. Special light emitting diodes developed by Würth Elektronik can be used to boost the growth and yield of greenhouse plants sustainably.

Thanks to modern light technology, it is possible to grow vegetables on small areas of land using vertical farming. This works regardless of the season and without any sunlight. Würth Elektronik develops the special LEDs required for this. An interdisciplinary team of specialists led by Harun Özgür provides the necessary biological knowledge.

Harun Özgür, head of the Optoelectronics department at Würth Elektronik, checks on the basil plants. He adjusts the lighting in the small greenhouse. It looks like a nightclub in here: The herbs are lit up in red, blue, and purple, stretching out into the artificial lighting. The flashy lights are produced by horticulture light emitting diodes (LEDs for short), which emit light at different wavelengths, thus influencing how the plants develop. This controls how quickly the plants grow, for example, and whether they sprout upward or spread out. 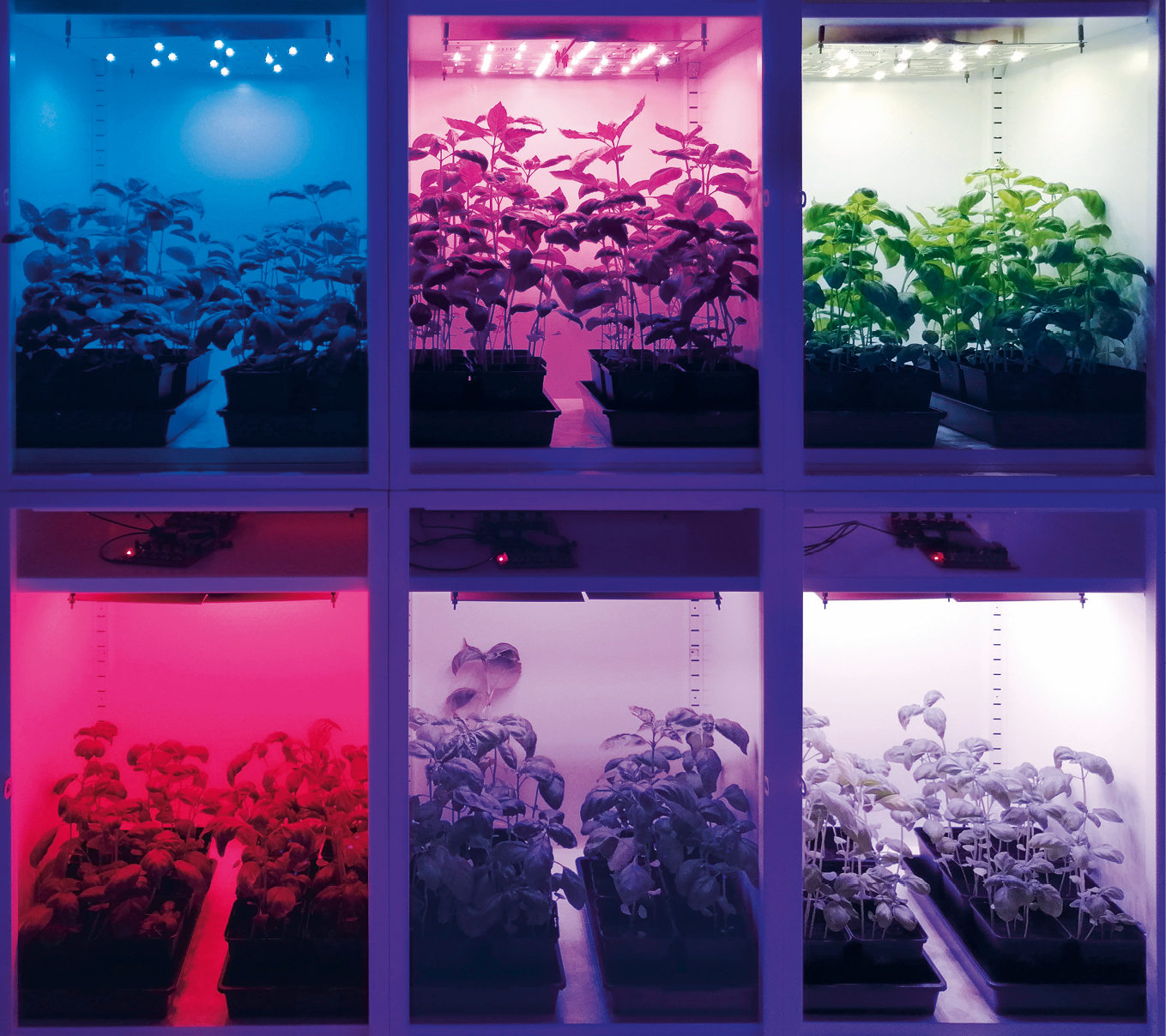 The experts from Würth Elektronik eiSos GmbH & Co. KG in Waldenburg have been researching innovative light formulas for crops over the last six years. This makes it possible to produce more flowers, more fruit, a stronger aroma, and even more vitamins. In order to achieve this, they mix wavelengths and combine LEDs with one another. They investigate and experiment with light: for example, within the wavelength range of 400 to 700 nanometers, where photosynthesis primarily takes place. Plants use light, water, and carbon dioxide to produce sugar and oxygen. An important process that can be enhanced using the right wavelengths. 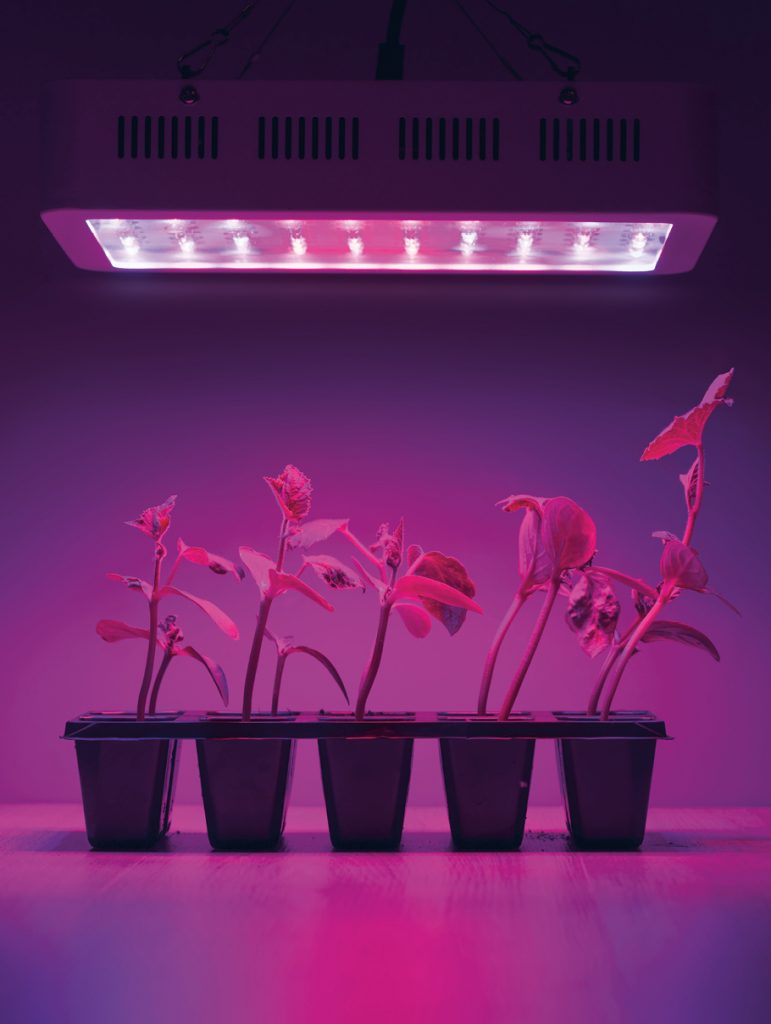 The right wave for each stage

What makes the LEDs so special compared to other greenhouse lights? The horticulture LEDs offered by Würth Elektronik cover a much wider spectrum of light. Each of them has a unique wavelength of light, which gardeners can combine to suit their individual needs. However, this requires a systematic approach: Each plant species reacts differently to different combinations of light and intensity. This information is key since the stages of blossoming, germinating, and developing roots all react differently to different wavelengths of light.

This even makes it possible to fine-tune the flavor, using blue light, for example.

Blue light makes plants compactor, while at the same time encouraging them to produce more phytochemicals. Phytochemicals are the natural substances in fruit and vegetables that are responsible for the color, smell, and aroma, such as sulphides in onions or carotenoids in tomatoes.

Würth Elektronik has its own in-house research department, which studies how to control plant growth. Experts from the fields of biology and agricultural science work here, which is something special and was not always the case. “In fact, it used to be almost impossible for tomato farmers or raspberry producers to find a point of contact for their lighting needs and problems,” reports Özgür. Würth Elektronik also cooperates with the greenhouse laboratory center at the Technical University of Munich, where several experiments involving tomato flowers were recently completed. 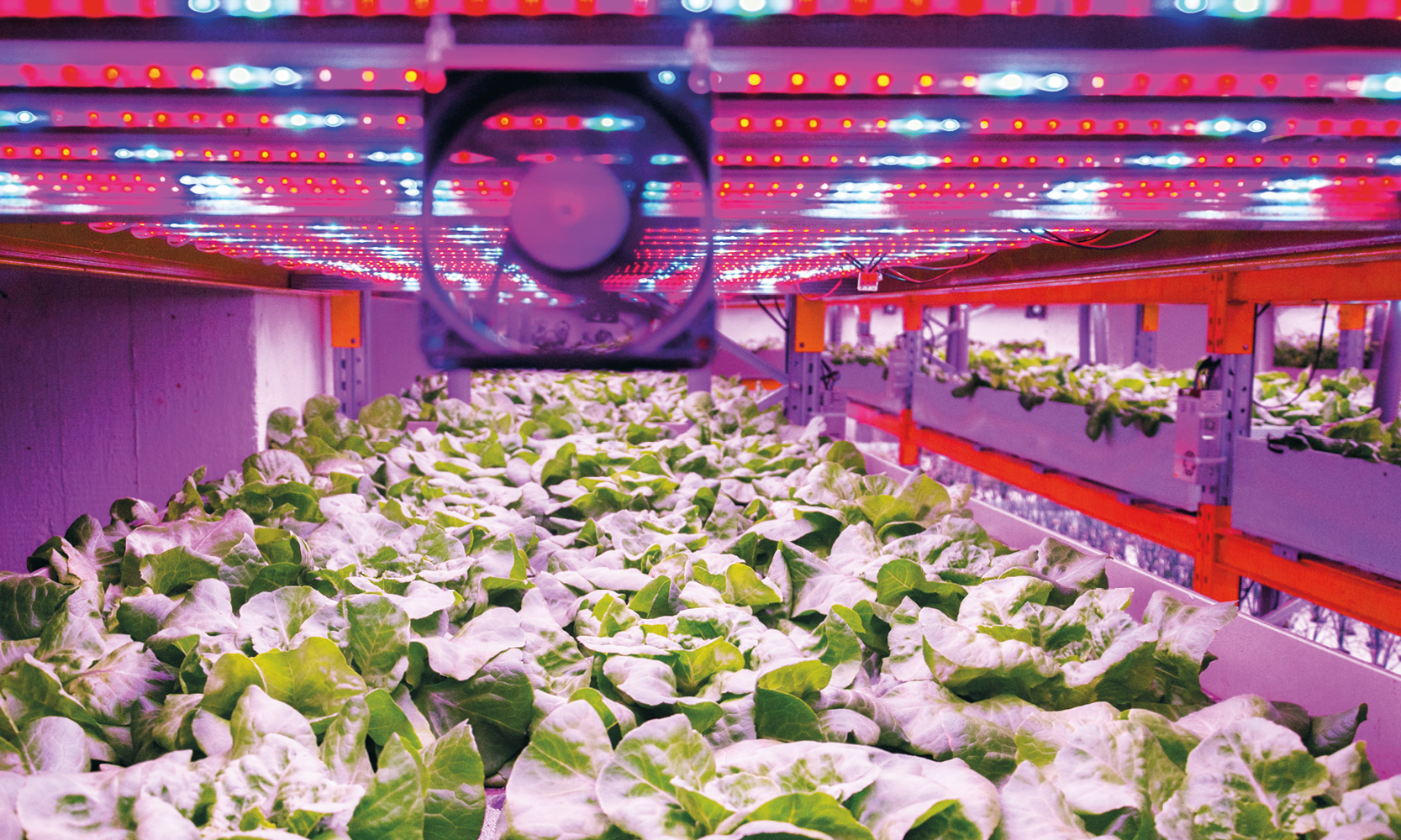 Vegetables can be grown on limited space regardless of the season and without any sunlight.

Regional tomatoes from the bunker

Another major advantage to the LEDs is that they do not become as hot as conventional greenhouse lamps. Therefore, they can be positioned very close to the plants. The vegetables grow on top of one another like in a cabinet, each shelf with its own lighting. As a result, the yield per unit area is significantly higher in vertical farming than in normal greenhouses. Furthermore, under these optimal conditions, it is possible to harvest more often each year compared to a greenhouse. Regardless of the season and without any daylight, it is possible to produce locally wherever there is space available.

“Tomatoes can grow anywhere, even in decomissioned bunkers,”

says Harun Özgür. At some Edeka and Rewe grocery stores in this part of the world, herbs and lettuce are already being grown in multilevel glass cabinets with purple lighting. Even gourmet chef Tim Raue operates a vertical farm in his Berlin based restaurant. Here the especially intense tasting herbs are picked shortly before the plates leave the kitchen. 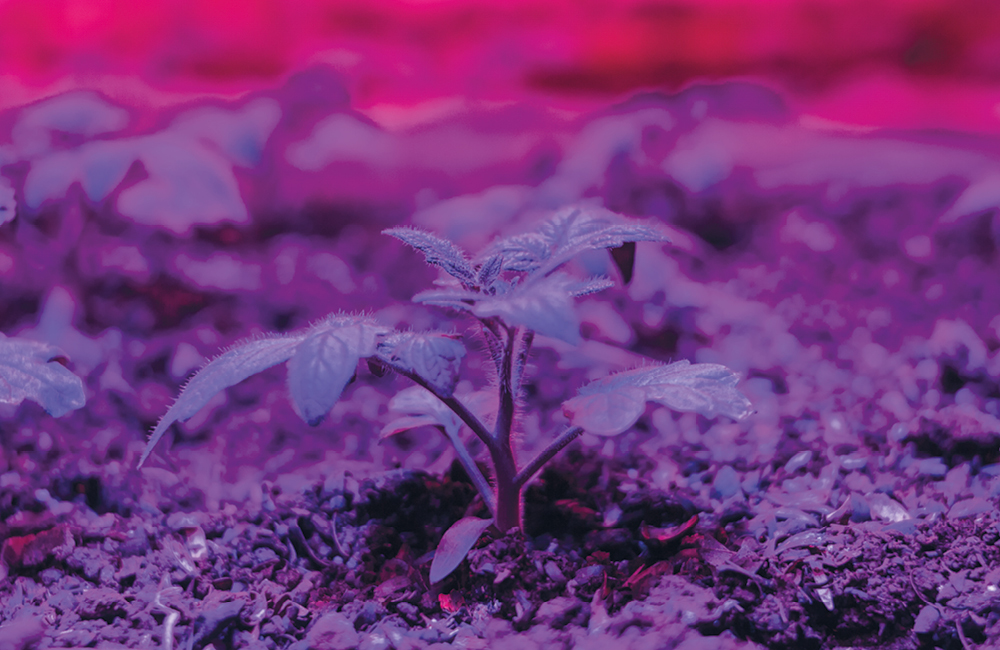 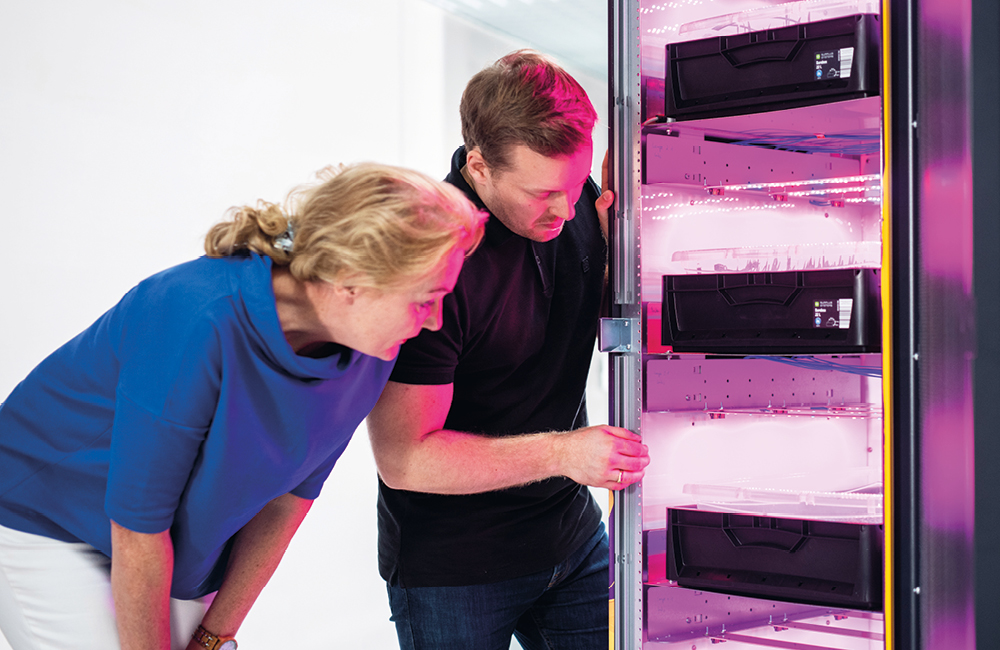 In vertical farming, the plants grow on top of one another, each level with its own lighting.

Vertical farming offers decisive benefits. For example, locally produced food reduces transport emissions exponentially: It is possible to cut CO2 emissions by 90 percent in this sector. Furthermore, because virtually no pests or diseases from outside reach the crops, gardeners hardly have to use any insecticides or pesticides. The water efficiency in self-contained systems is unparalleled, making it possible to save 70 to 95 percent. And LEDs boast exceptional power consumption: At the Technical University of Munich, the light emitting diodes used in experiments consumed up to 40 percent less power than sodium vapor lamps, while at the same time delivering higher yields. Can vertical farming combined with cuttingedge horticulture LEDs help feed the growing world population sustainably in the future? That is entirely conceivable. According to a forecast by the United Nations, there will be around two billion more people living on earth by the year 2050. Roughly two thirds of the global population will live in cities. However, millions of hectares of farmland is being lost each day around the world. The figures speak for themselves.

What type of light does what?

Studies show that plants even react to wavelengths that we had not previously thought to be particularly important for their development. The various wavelengths initiate different processes in the plant organism.

Red light
(630 to 660 nanometers) provides the most important wavelength for photosynthesis and is essential for vertical growth. It regulates blossoming, dormancy, and seed germination.

Blue light
(400 to 520 nanometers) is another key wavelength for photosynthesis. Overexposure to this light can also inhibit growth. Blue light affects the concentration of chlorophyll, lateral bud growth, and leaf thickness.

Far-red light
(720 to 740 nanometers) affect germination. It can shorten the flowering time of plants and promote vertical growth.

Green light
(500 to 600 nanometers) was once thought to be unimportant for plant development. However, recent studies have shown that plants that grow in the shade of other plants are particularly fond of green light.

UV light
(280 to 400 nanometers) actually damages plant cells, but some plant species, such as lettuce and tomatoes, appear to be more resistant to it than others. UV light could serve as an important fungicide, for example. It can be used to encourage plants to produce phytochemicals.