Light is the most important source of energy in our lives. Not just because there would be no colors without light—here you can find out about the special relationship Würth has with light and what makes for good lighting concepts…

Light means not only seeing, but also perceiving. For Würth, this also means: recognizing opportunities. A cover story closely linked to energy, innovation and movement. Just as light changes throughout the course of the day, technology is constantly changing.

On a good winter day in Turku, the illusion of enjoying the light of day prevails for at least five hours. But it is an elusive and dim light that shines over Finland during this time of year. Nevertheless, the inhabitants of Turku have managed to maintain their optimism. Even more: They had an enlightening idea. Literally. Turku was named the European Capital of Culture, with the campaign “876 Shades of Darkness” at the heart of the program. Everything available as an artificial source of light in the city center was switched on in the afternoon to celebrate the culture of darkness. An urban shadow play that outlasted the year as the capital of culture and which was in fact a festival of lights missed greatly by all. Still today, almost a decade later, libraries, department stores and apartments are illuminated brightly during the dark months, thus keeping the hope alive that day will truly break again soon in Turku. 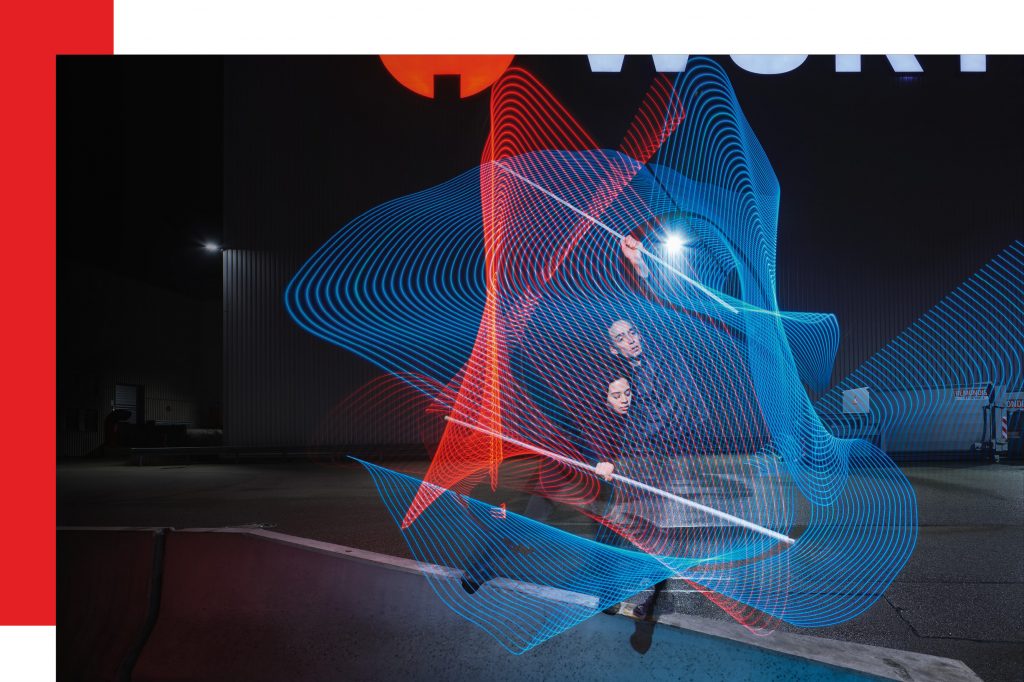 Light is the most important source of energy in all of our lives. Not only because there would be no color without light—light is quite simply where everything begins. This also holds true in economic terms: the invention of the electric lamp at the beginning of the 19th century sparked the Industrial Revolution. An innovation without which our society would no longer be fathomable. At the turn of the century, digital light technology took over in all aspects of our lives.

In a figurative sense, light also made it possible for the idea of Würth to be successful across the globe. After all, light represents energy, speed, and even power. All positive and forward-looking values, as befits Würth and belonging to our Würth identity. Innovative power in particular, which allows ideas to see the light of day—not just proverbially speaking. The constant development of our product range, even beyond our fastening materials, has been one of the company’s principle success factors.

In the Electrical Wholesale unit of the Würth Group, light is an important foundation for business, from Baden-Wuerttemberg to Lithuania and even Hong Kong. Enlightenment is a magic word in modern society as well, not necessarily meant in the religious sense. To put it a little more uncouthly: People like to keep things colorful. The world would no longer survive without switches, radiators, lamps, light technology. All types of light sources allow us to see when the sun is not currently shining. The sun’s light takes eight minutes to reach the earth, racing through space at a speed of over 300,000 kilometers per second.

WHERE THERE IS LIGHT, THERE MUST BE SHADOW – IT DIRECTLY AFFECTS OUR WELL-BEING AND EMOTIONS. 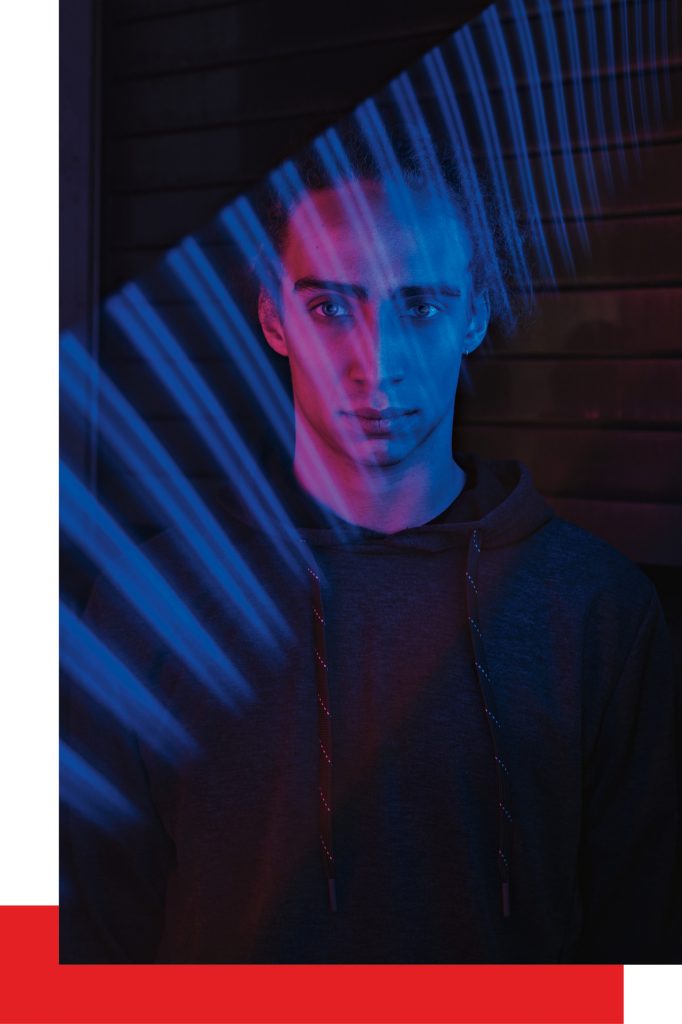 The light experts at the Würth Group company Gaudrė in the Lithuanian city of Vilnius know the importance of proper lighting: “Humanity has lived for millions of years according to the rhythm of natural light. That is why the biological clock inside us requires the same cycle, even if we extend our active day. The work environment at the office should be more intense in the afternoon with a cold color temperature, while it should be warm at home with a pleasant lighting intensity. In general, we need light but not necessarily a lamp as an object. Even simple, but well-designed solutions improve our activities and promote our well-being.”

The invention of efficient blue light-emitting diodes, LED for short, represented a quantum leap, making it possible to create bright and energy-efficient sources or light. Japanese engineer Shuji Nakamura and his colleagues received the Nobel Prize in Physics for this invention in the mid 1990s, replacing the former energy-wasting light bulbs. 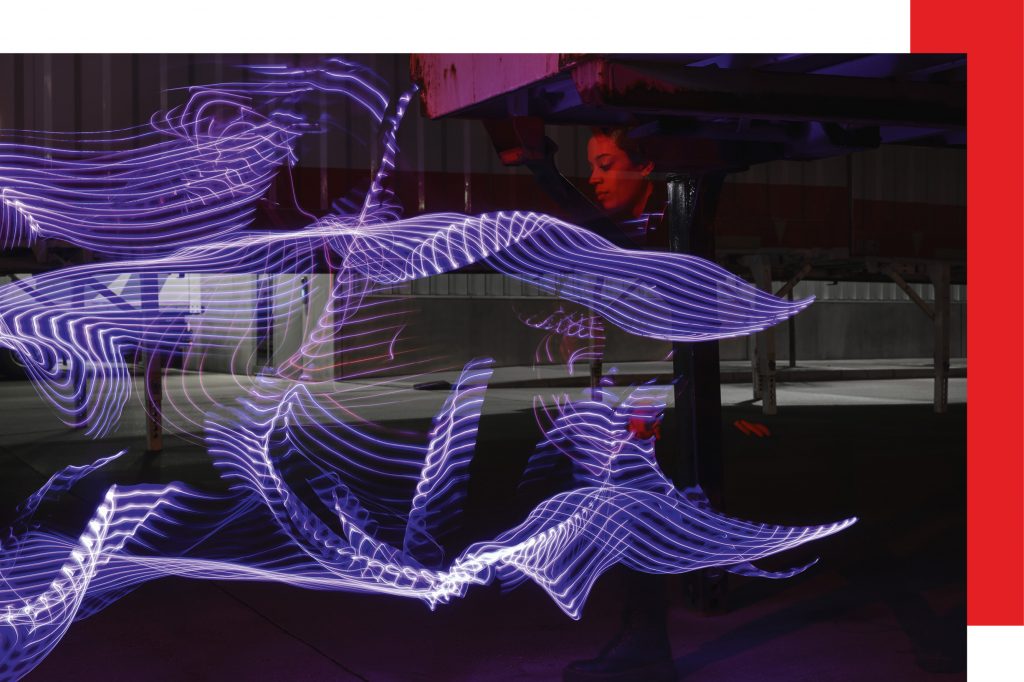 Now we are squarely at the core of the issue with forward-looking ideas, in laboratories, lecture halls, factories, and meeting rooms. The topic of light at the workplace was neglected for a long time. Now it is one of the most important subjects at the office, intensified by the omnipresent debate on screen time. Light is closely associated with concentration and productivity, directly affecting our well-being and emotions. Light planning and lighting design have become master’s programs, and not without reason.

Jochen Bieringer, head of the Würth Group sales branch for Lichtzentrale Lichtgroßhandel GmbH in Ansbach, works with bright moments on a professional basis. The specialized company offers a product range with 550,000 items, selling around one million lights per year, primarily to craft and industry customers. The best sellers are related to lighting at the workplace.

Bieringer, who often works directly with the customers, explains the next big trend after LEDs, which has already been addressed by the Gaudrė colleagues in Lithuania. Once again there are three letters at play, which appear to have a magical significance: HCL. This stands for Human Centric Lighting, a type of artificial lighting oriented on the natural course of daylight. This is achieved by means of a targeted lighting control system. In this context, the layman can learn that white is not just a single hue in the world of lights—indeed, there are many different shades of the basic color, from warm to very cold white. The right mix can therefore produce the desired biologically effective lighting. 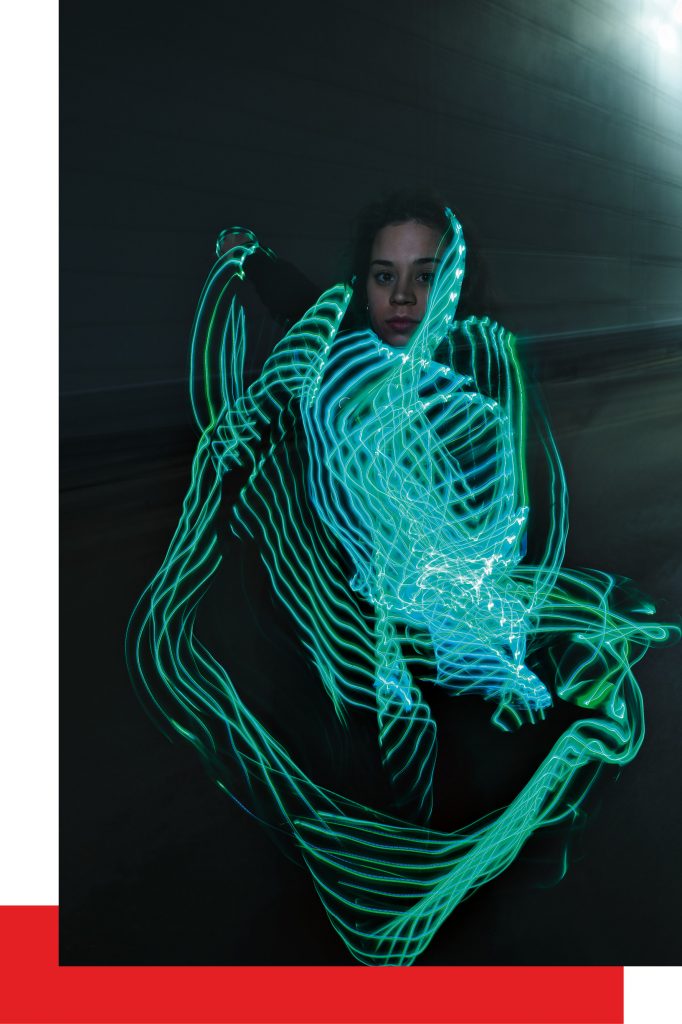 Lichtzentrale solves complicated light-related problems, even on a large scale—be it for the equipment at Würth’s enormous central warehouse in Kupferzell, the State Insurance Institute in Munich, the headquarters of major corporations such as AEB in Stuttgart, exhibition centers in Frankfurt, or the Humboldt Schloss palace in Berlin. Jochen Bieringer has noticed a distinctly different mindset with regard to light when it comes to planning work environments or open spaces in particular: “I have been working in this field for 25 years now, but it never gets boring. We are faced with technical advancements virtually on a daily basis. Light holds a fascination for us that we can no longer let go.”

And it is not just the specialists who echo this sentiment. There are places in the world where one can hardly wait for night to come because they light up so magnificently. This certainly holds true for Turku, but night in the megacities of Asia is even more impressive. In Shanghai, the overpasses are illuminated in blue from below. Whoever regards them from the observation deck of a skyscraper can recognize in them the veins of mobility flowing through the city’s body. The facades emblazoning the cityscapes of Singapore, Hong Kong, Tokyo, and Seoul are even more gaudy. Fully charged urbanism, manifested in mesmerizing neon lettering. A beacon of consumerism, the artificial retina of a boomtown, flamboyant makeup for a never-ending skyline—every observer discovers their own interpretation of the urban light show. Occasionally, psychedelic chain reactions in rainbow colors rub off on the mind. Reflection, this also requires the appropriate lighting. 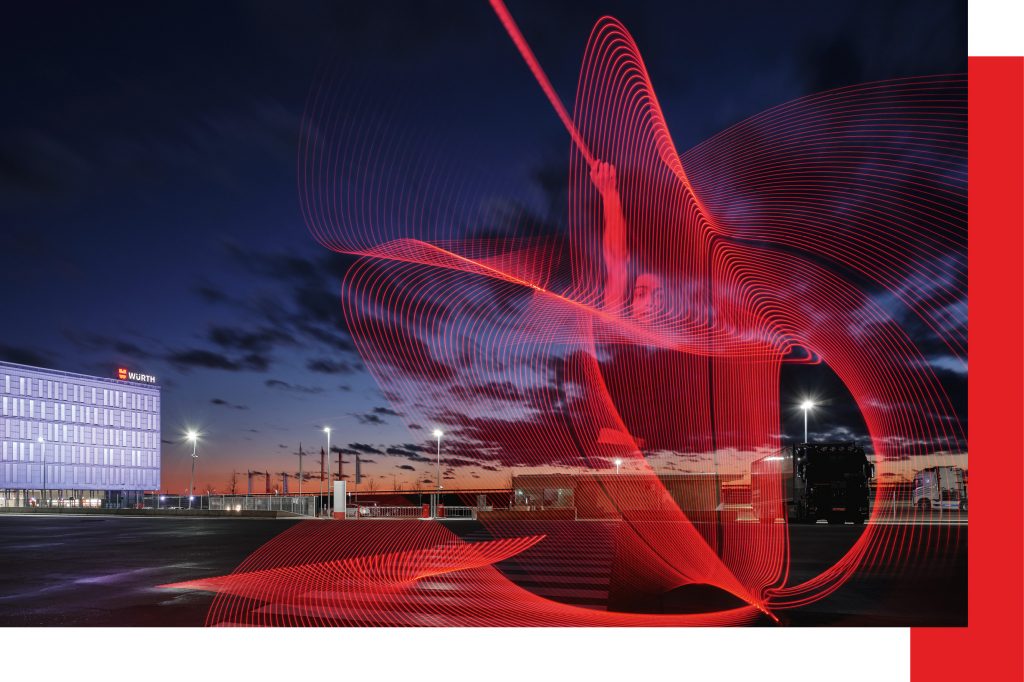 From a technical standpoint, it would be no problem at all to switch off the dusk and dawn forever by turning up the lights. But that would be dangerous. As the artists in Turku realized, light and dark may be opposites, but they also influence one another.

In the agitated tempest of lasers, neon lights and LEDs, there would be no room to think after an extended period devoid of darkness. That is why we need to dim the lights every now and then. However, switching the lights back on is just as essential as switching them off and shutting everything down. The next glimmer of hope. 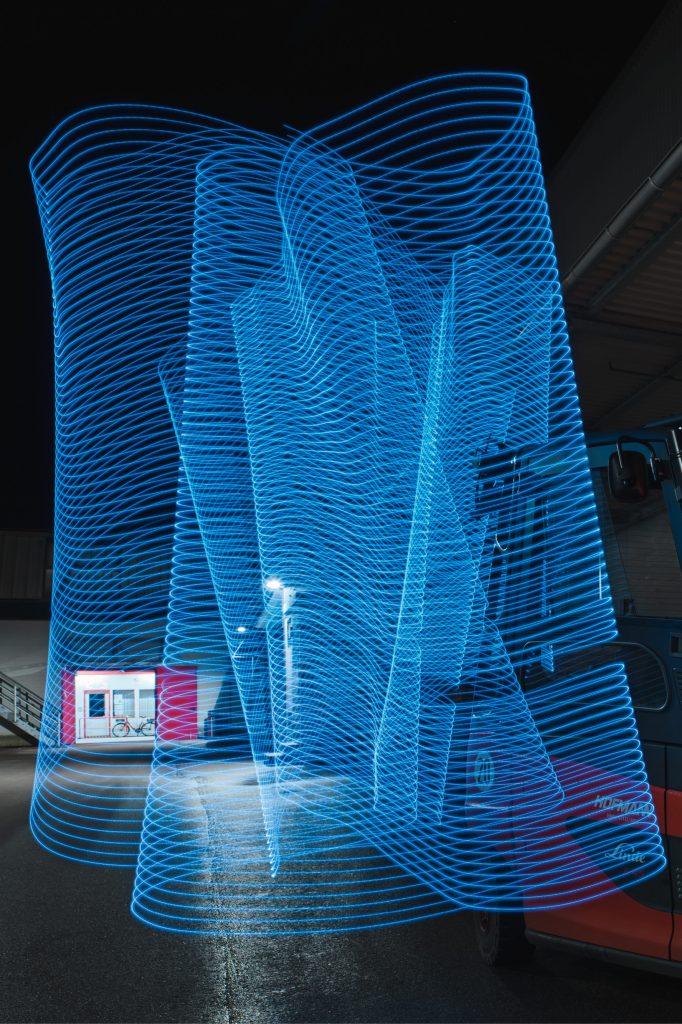 The Würth Group is split up into two operational units: Würth Line and Allied Companies. The Würth Line companies are responsible for the Group’s conventional core business, the sale of assembly and fastening materials.

As trading and manufacturing companies, the Allied Companies operate in similar fields of business, thus rounding off the Würth Group’s portfolio. They are divided into nine strategic business units—one of which is the Electrical Wholesale unit.

The Lithuanian lighting specialist Gaudrė in Vilnius, one of Würth’s Allied Companies since the beginning of 2018, belongs to this dynamic area, along with Lichtzentrale Lichtgroßhandel GmbH in Ansbach, Deko-Light Elektronik Vertriebs GmbH in Karlsbad, and Deko-Light Ltd. in Hongkong.
The companies grouped under the Electrical Wholesale unit sell products and systems from the fields of electrical installation, industrial automation, cables and wires, tools, data and network technology, lighting and illumination, as well as household appliances, multimedia products, electrical domestic heating technology, and regenerative power generation.

The Electrical Wholesale unit is the business unit with the highest sales volume out of all the Allied Companies, generating 13.4 percent of the Würth Group’s total sales. Further strategic business units include Electronics, Production, RECA Group, Trade, Chemicals, Tools, Screws and Standard Parts, Financial Services, and others. 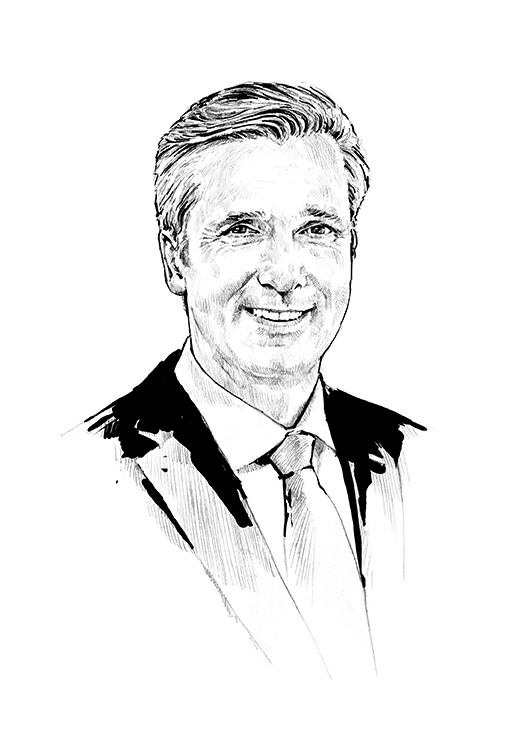 Without light, there is no life. Of course, that also applies to Würth. Strictly speaking, although a company cannot shine by itself, it can do so all the more in a figurative sense—through its actions. That resonates wonderfully with our aspiration of serving as a beacon in the economic landscape and in society.
Quite a harmonious picture in my opinion: Companies can shine when they take their responsibility seriously. In our case, this has held true for the past century. 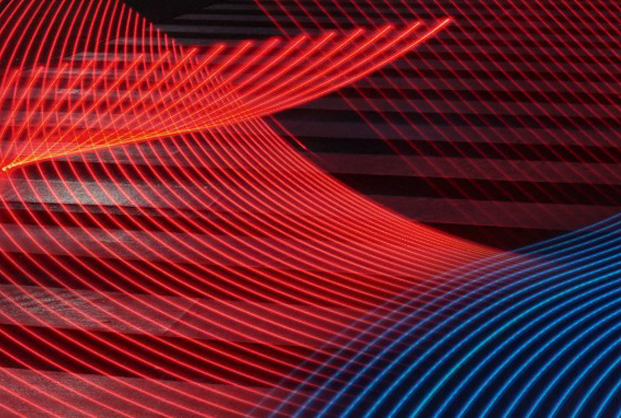 Read more in our Interview.