Trailblazing in the Philippines: The new terminal at Mactan Cebu International Airport has an undulating roof made entirely of wood – the only one of its kind in Asia to date. Würth Austria delivered the fastening technology for this spectacular building.

The new terminal at Mactan Cebu International Airport has a roof made entirely of wood – the only one of its kind in Asia to date. The building can withstand earthquakes thanks to the fastening technology supplied by Würth Austria.

A gargantuan yet somehow delicate looking, curved wooden roof arches over a 65,000 square meter building like gentle waves, with glass walls stretching all the way to the ground. It is an enchantingly bright building with an airy appearance and unique architecture, completed within no time. The new Airport Terminal 2 at Mactan Cebu International Airport in the Philippines, which was inaugurated last summer, has proved to be a real attraction among both visitors and locals. 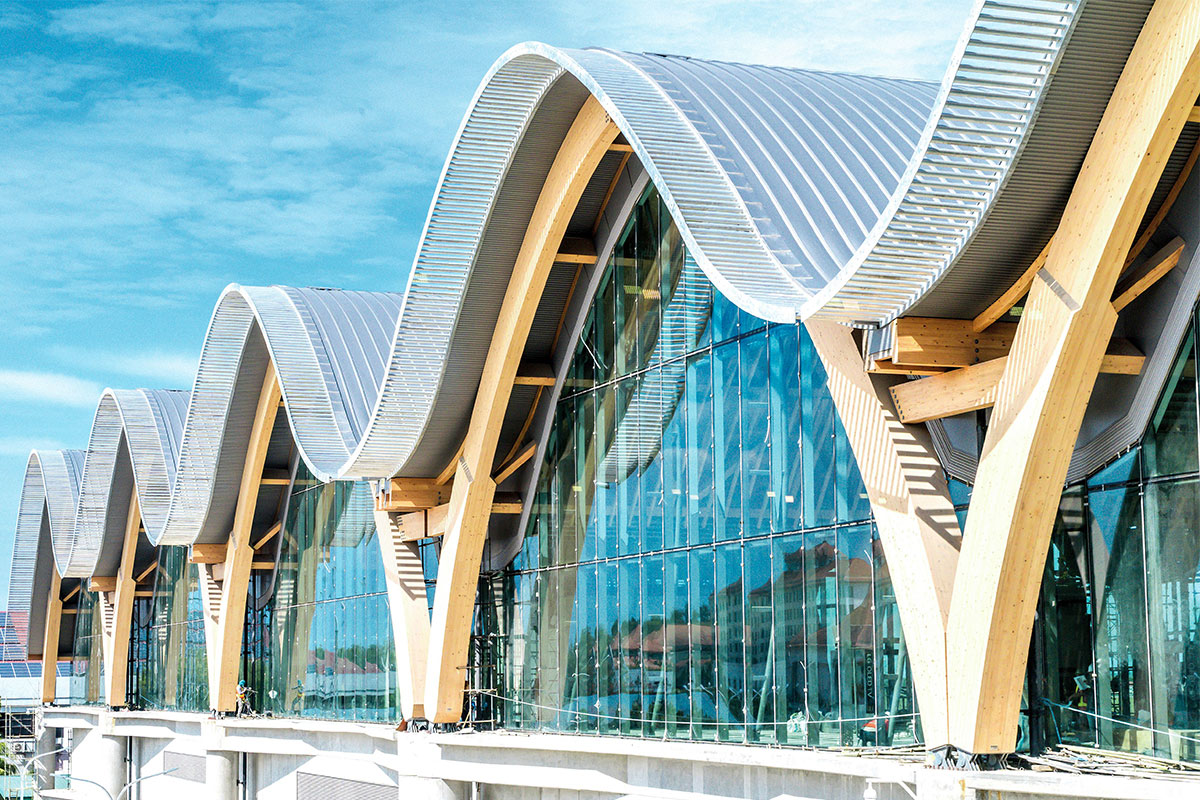 After being prefabricated in Austria, the components were assembled on site in just three months.

Light floods the three-aisled entrance hall, which features three adjoining wings, housing 48 check-in counters, the largest duty-free area in a departure area in the Philippines, a spa, restaurants, bars, and other facilities spread out across three floors. The idea is to make sure passengers are as comfortable as possible during their stay. The architects’ intention was to reflect the friendliness, openness and warmth of the Philippine culture in the new building. The ambiance should resemble that of a resort more than a functional building. They succeeded: The Filipinos, especially the inhabitants of Cebus, are said to be very proud of their new airport. 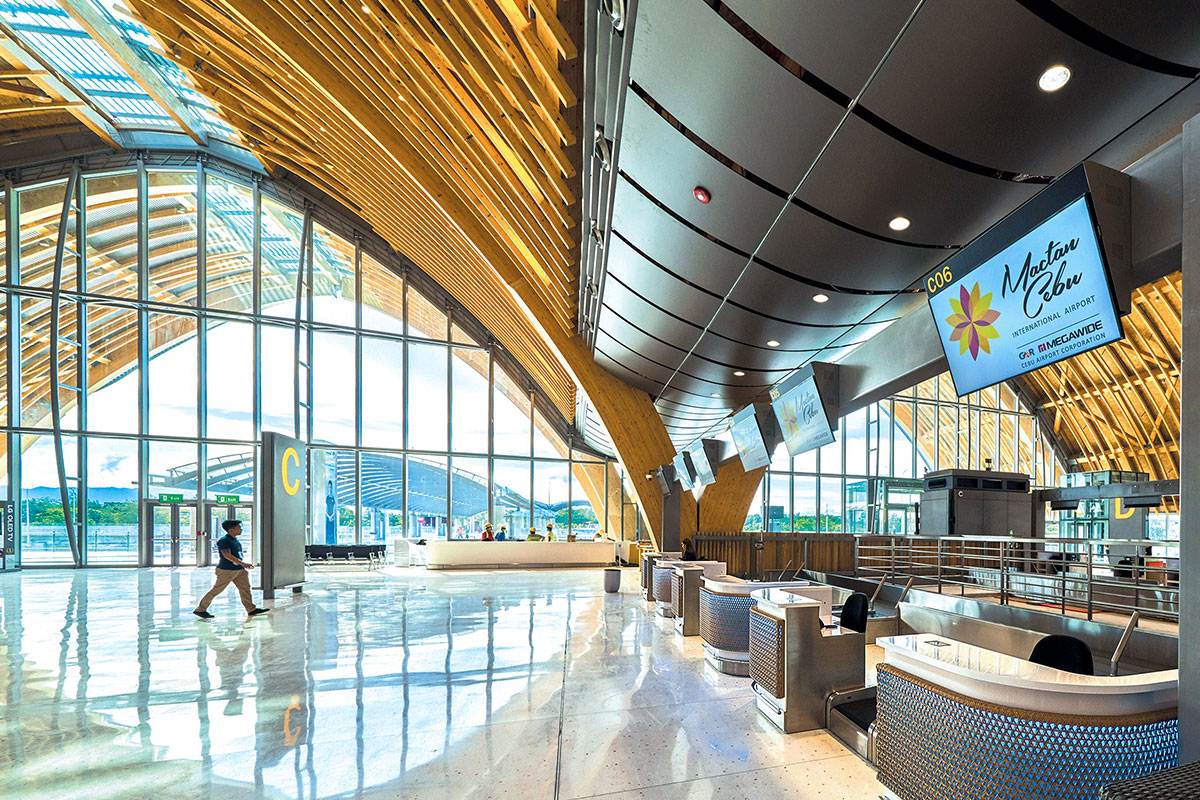 The openness and warmth of the Philippine culture are reflected in the new building. 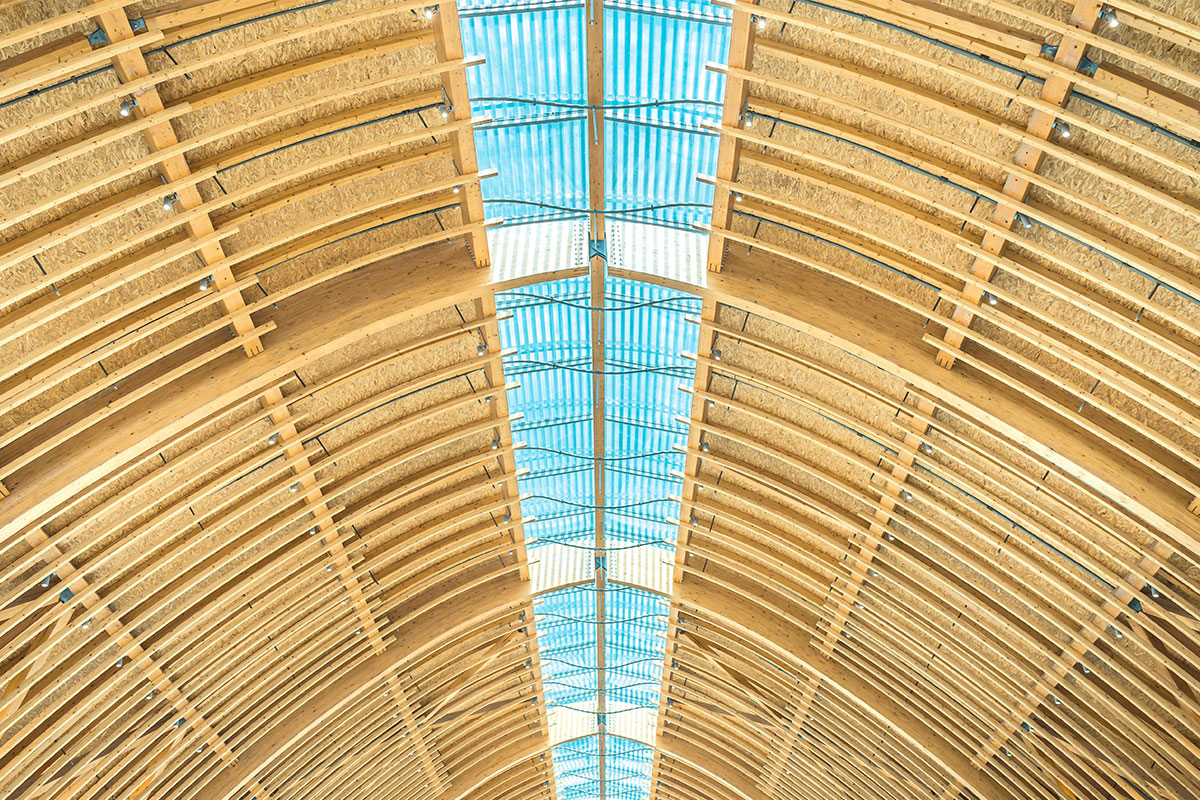 Some 4,500 cubic meters of laminated timber were required for the project.

In all of Asia, there is no other airport building whose supporting structure and roof are made entirely of wood. Primarily natural construction materials are used throughout the entire terminal area: The walls in the sanitary facilities are covered in various types of wood and moss from Italy. The polished stone flooring with lustrous mother-of-pearl inlays made of native mussel shells in the entrance hall represents the sand on the Cebus beaches.

Although wooden buildings are traditionally popular in the Philippines, the builders, Philippine syndicate GMR MEGAWIDE Cebu Airport Corporation (GMCAC), selected the Austrian construction company Rubner Holzbau for the task. But why was wood from Lower Austria used? Project manager Anton Wanas from Rubner’s headquarters in Ober-Grafendorf explains: “It would not have been possible to use wood from local sources. There would not have been enough tropical wood available for the project without damaging the environment. Moreover, there are no manufacturers there who would have been able to produce the components necessary for this structure.” According to Wanas, this contract was the largest of its kind in the company’s history.

Measuring 15 meters high and spanning 30 meters wide, the undulating supporting structure of the vaulted roof contains 4,500 cubic meters of laminated timber. The matching 23-meter-long half arch trusses were planned and prefabricated by Rubner Holzbau in Austria. The components then embarked by ship on their adventurous journey through the Rhine-Main-Danube Canal to the Philippines via Antwerp. The final assembly process took roughly three months under the direction of Rubner Holzbau in the City of Lapu-Lapu on Mactan Island, directly across from Cebu City. 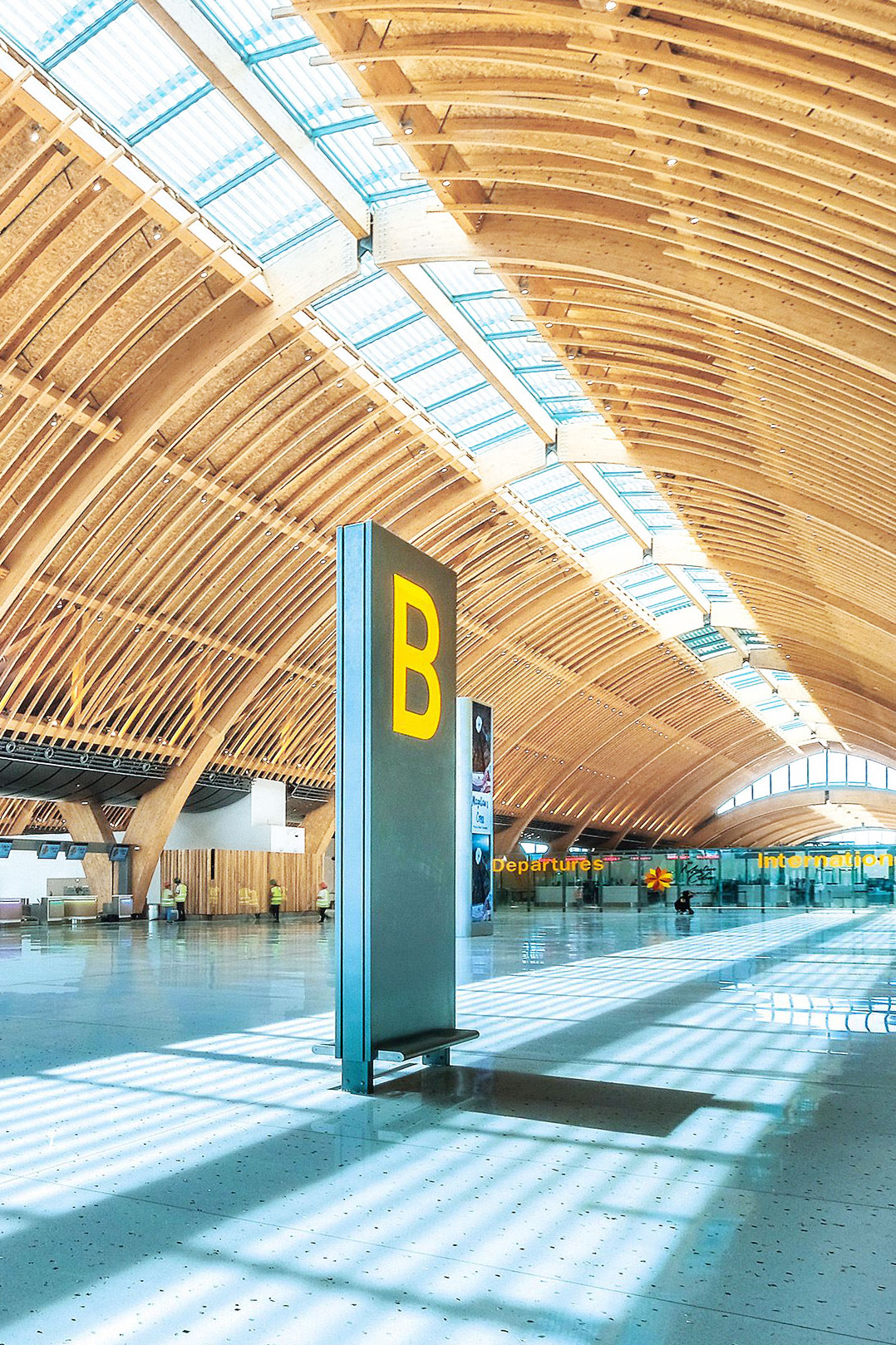 The stone floor in the entrance hall contains mother-of-pearl inlays made of native mussel shells.

MUSSELS AND MOSS FOR A WELLNESS ATMOSPHERE

Thanks to the new earthquake-resistant and hurricane-proof building, it was possible to more than double capacities to 12.5 million passengers per year. Mactan Cebu International Airport is now considered one of the most modern airports in Southeast Asia. The fastening technology for the terminal was supplied by Würth Austria. Sales representative Werner Kirmann has served Würth customer Rubner Holzbau for more than 15 years now: “Würth scored extra points during this large-scale project with the company Rubner Holzbau not only because of its competitive prices but above all because our products have the necessary internationally recognized approvals and certifications.” 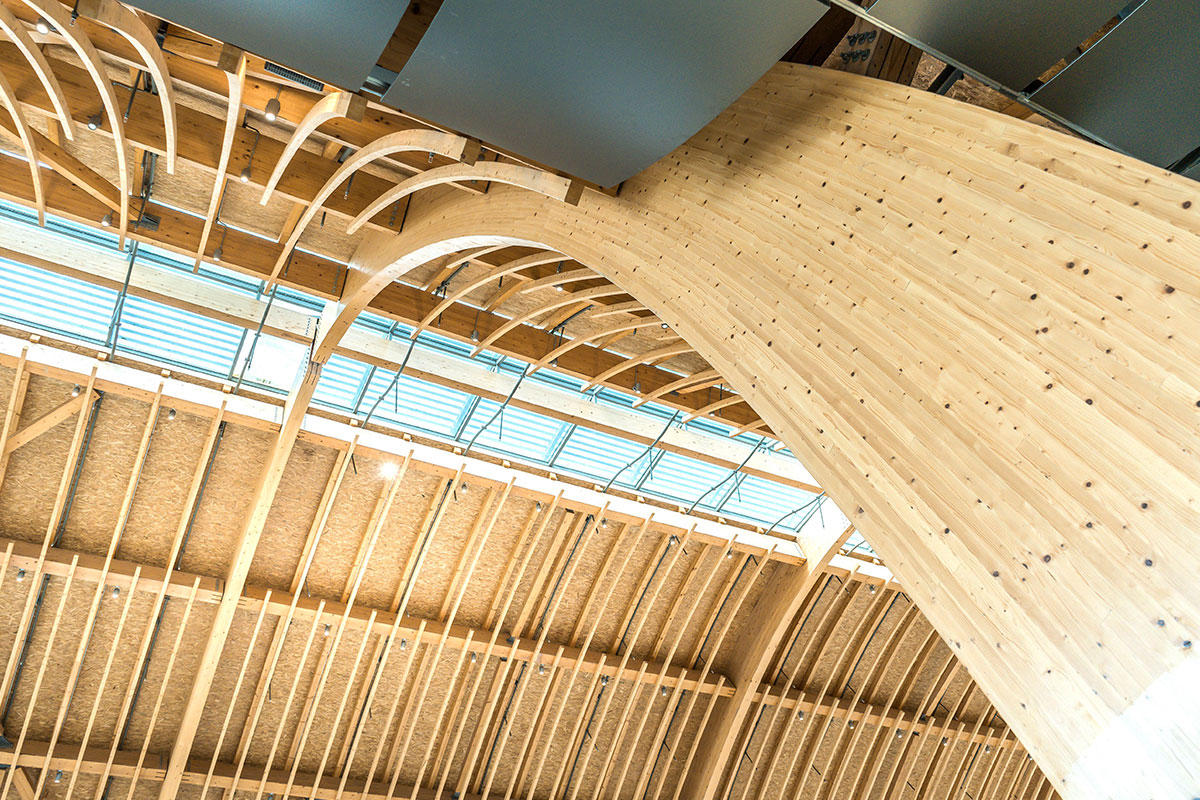 The wooden structure is earthquake-resistant thanks to the fastening technology supplied by Würth.

Werner Kirmann mentions the impressive quantities of ASSY® screws that grant the airport building stability and elasticity at the same time: Some 40,000 full-thread wood screws with a cylinder head, 32,000 full-thread screws with a countersunk head and 4,000 hexagon metal screws were installed. Kirmann: “The longest screw used was the 80-centimeter-long, full-thread screw with a cylinder head.” Many other Würth products were used as well: adhesive sealing tape and construction adhesives, injection mortar, spray paint, along with various tools and screw clamps.

Word of Austrian involvement in the new terminal building’s success story at Mactan Cebu International Airport has spread like wildfire. There is already a follow-up order in the Philippines: A new terminal building is currently being erected at Clark International Airport, north of the capital city Manila, and Rubner Holzbau is in on the project once again as the main supplier together with Würth Austria. A strong team – for an even larger construction project.

In 1962, Würth Austria was founded in Vienna as Würth’s second foreign subsidiary. The headquarters were moved to Böheimkirchen, Lower Austria, in 1999. The company employs more than 800 people, generating sales of EUR 210.8 billion in the 2018 fiscal year. The Würth Line’s core product range contains more than 125,000 items: from screws, screw accessories and anchors to tools, chemical products and personal protective equipment.