Building bridges—from one side of a river to another or symbolically between people or cultures—is a daunting task, which can certainly be fraught with peril. Bestselling author Jan Weiler has experienced this in his own family. He describes his experiences here…

Skillful bridge builders not only traverse challenging passages, in the process they also frequently solve seemingly unbridgeable problems that cause people a great deal of grief. One need only think about the many talented dentists whose work has connected teeth that had been hopelessly separated from one another although they were just a few centimeters away from each other. As you can see: Bridges do not have to be huge to do some good.

But all that aside, it is usually the large bridges that fill us with untold fascination because crossing them consummates a symbolic act for us, allowing us to partake in connecting different cultures. Anyone who has strolled across the mighty Galata Bridge in Istanbul knows this feeling. It feels as if one were in a city district all its own, which in turn binds together entirely different districts within the sprawling city. Especially in Istanbul, it becomes clear that building a bridge from one area to another represents much more than a mere technical endeavor, precisely because it connects people to one another.

This requires tact in addition to expertise. Unfortunately, this is something I evidently lack. In my capacity as head of the household, I am by no means considered a Pontifex Maximus, but rather more of a rusty cement mixer without any authoritarian power. I always fail miserably whenever it comes to building bridges between my children, or at least bridges from their rooms to the kitchen. I go to great lengths to act as an intermediary and patiently allow both sides to present their case.

Recently, the batteries in my daughter’s Bluetooth speaker mysteriously went missing. Our son had taken them to power his drone. He justified his actions with the fact that his drone is more important than her speaker. This of course is a matter of opinion. At any rate, I ordered him to give the batteries back. He could borrow them whenever our daughter was not listening to music. So around four at night.

I thought this was quite fair and rejoiced in the marvelous bridging effect of my pedagogical intervention. Then I drank a cup of coffee, read the newspaper and decided to start working. But my mouse did not work. I was glad to postpone the work, and I sat down in the living room to watch TV. The remote did not work. Our clock radio was not working either. The same was true for the clock in the kitchen, the scale, the garage door opener, and my dictation machine. Not even the lint remover I use to remove the little bits of fuzz from my sweaters was working. As a matter of fact, nothing was working, except my daughter’s speaker and my son’s drone. This is not the outcome I had envisioned. In order to bridge this conflict, we would need a brilliant bridge builder. We need the architects of the Galata Bridge. Or a good dentist. 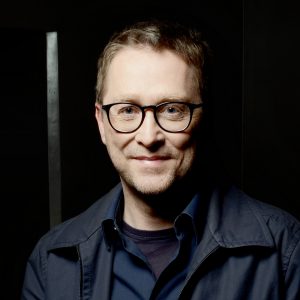 born in Düsseldorf in 1967, he was the editor-in-chief of the German magazine “Süddeutsche Zeitung Magazin” for many years. He has been working as a freelance writer since 2005. He primarily writes novels, columns, radio dramas, and screenplays, and even makes an appearance as the narrator in his CDs as well as a commentator at tours across all of Germany. His new novel “Kühn hat Hunger” (Kühn Is Hungry) was published by Piper at the beginning of October, 2019.