The Würth Foundation has been supporting the project “iThemba Labantu” in South Africa for years. Now a new soccer field has been inaugurated for the 400 children and adolescents cared for there. A former captain of the German national team is the namesake of this sports complex – he attended the inauguration.

In the South African township of Philippi in Cape Town, the Würth Foundation has been supporting the social-welfare project “iThemba Labantu” substantially for years on the initiative of Carmen Würth. The Philipp Lahm Sports Ground has now been inaugurated for the 400 children and adolescents cared for there. Carmen Würth gladly contributed her birthday present to the project, which she had received from her numerous guests on her 80th birthday in the form of donations to the Würth Foundation.

When the excitement makes the legs shake, the old one-two suddenly stops working. Of course the kids are proud to kick the ball around with Philipp Lahm. It may even be the most exciting day of their lives. But it also makes them nervous. And of course their parents and friends are also sitting on the sidelines, watching and cheering them on. Today is a special day at the “iThemba Labantu” social-welfare center, located in the heart of the Philippi township, one of the largest shanty towns in the South African city of Cape Town. The long-awaited inauguration of the Philipp Lahm Sports Ground serves as a symbol of hope for a better future in a grim environment. German pastor and missionary Otto Kohlstock, the head of the center, says: “Look around; we are an oasis in the middle of the muck.” In English, “Themba Labantu” means: Hope for the people. Hope is nourished here because we found people who truly want to help. Like Carmen Würth, who has been strongly committed to disadvantaged children for years. She says: “Africa is considered the cradle of humankind and as a result of love. That is why we want a smile to light up on these children’s faces again.”

That is not an easy task in Philippi. An estimated 400,000 people live here under degrading conditions. With unemployment at 80 percent among young people, it is a social hotspot with a high crime rate. Life is a constant battle between drugs, violence and gangs.

During a college trip 20 years ago, Margarete and Klaus Doppler met Pastor Otto Kohlstock, who has been advocating for the poor in South Africa since 1985. Deeply moved by the experience, Margarete Doppler founded the association Themba Labantu – Hoffnung für die Menschen e.V., with her husband Klaus contributing his professional contacts. Pastor Kohlstock took charge of the Philippi community center in 2003. The new association helped to form a hospice for people suffering from AIDS and a preschool with leisure activities. The children were able to make artwork, play music, act on stage, and play sports. Würth became aware of the project during the 2008 Würth Congress in Cape Town. It was immediately clear to Carmen Würth that she wanted to support this association: “One of the major problems in the world is poverty. This leads to hopelessness, especially in combination with widespread unemployment, crime, hunger and the lack of a social network, which is essential for children and adolescents in particular.” On her initiative, the Würth Foundation has been supporting the project substantially ever since. The hospice evolved into a care center, while a soup kitchen, a training workshop for car mechanics and a solar workshop emerged, among other things.

“A SOCIAL NETWORK IS ESSENTIAL FOR CHILDREN IN PARTICULAR,” SAYS CARMEN WÜRTH. 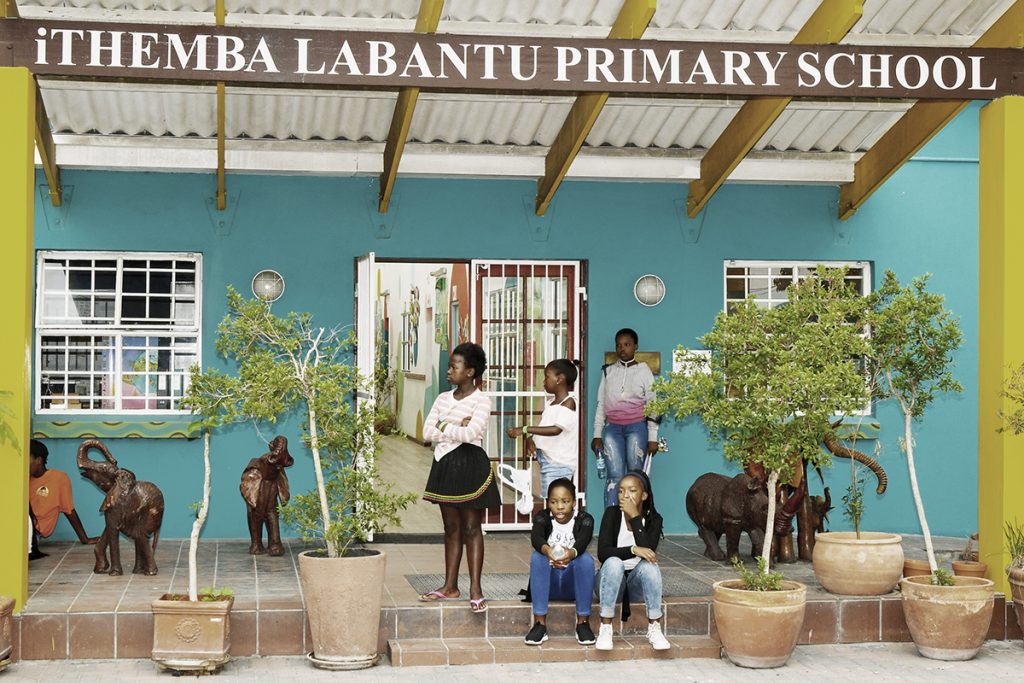 Exotic on the outside, furnished lovingly and with all of the essentials on the inside: the schoolhouse in iThemba Labantu.

In the run-up to the 2010 Soccer World Cup, Philipp Lahm and his foundation were also in search of a suitable social project in the region. Together with him, a decision was made to add a sports ground to iThemba Labantu. But the designated site, a reservoir that had decayed into a garbage dump, along with the climate were difficult. It would need very expensive artificial turf. This would not have been possible without the Würth Foundation. On the occasion of her 80th birthday in July 2017, Carmen Würth asked her guests for donations instead of presents. This money benefited the project.

Now everyone is celebrating the opening of the playing field and Philipp Lahm, 2014 world champion, is celebrating with them. “Many children live here in unbearable poverty. By opening the Philipp Lahm Sports Ground, we hope to give them a place other than the street where they can play soccer together,” says Lahm. Some 400 children and adolescents come here every day, attending school, working in the workshop and training in the iThemba Labantu FC sports club. Here they are safe.

“This is a pilot project for Cape Town,” says Ulrich Roth, board member of the Würth Foundation, “there is a great deal of interest in making it work.” An example that should set a precedent for other townships. The misery is rife after all. “The people in Africa are forced to endure too much,” says Carmen Würth, “helping them is first and foremost an act of charity.”

Opening kick with Philipp Lahm in the community center

More information on this project can be found here: www.themba-labantu.de