Out of love for  the fine arts

Innovative, first-class architecture has always played an important role in the Würth Group. A request for tenders was even initiated in architecture competitions for several buildings in order to ensure originality and to highlight the Group’s decentralized nature. Nevertheless, all of the structures have one common characteristic: the unmistakable color scheme of the Würth Group. 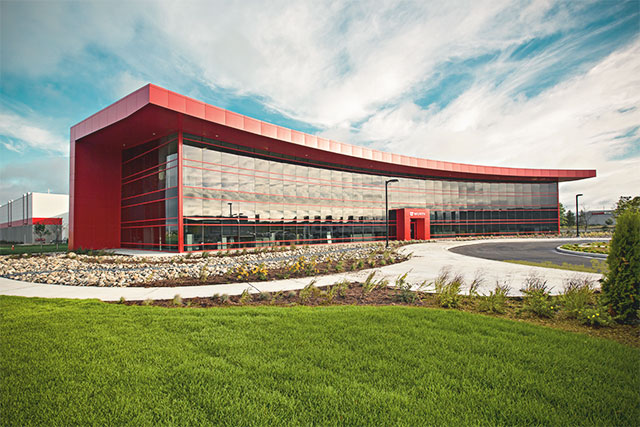 The headquarters of Würth Canada in Guelph, Ontario, are not just an eye-catcher but are a real all-arounder: high environmental standards and ergonomic workspaces make day-to-day work easier for the employees inside, which in turn has a positive impact on customer service. 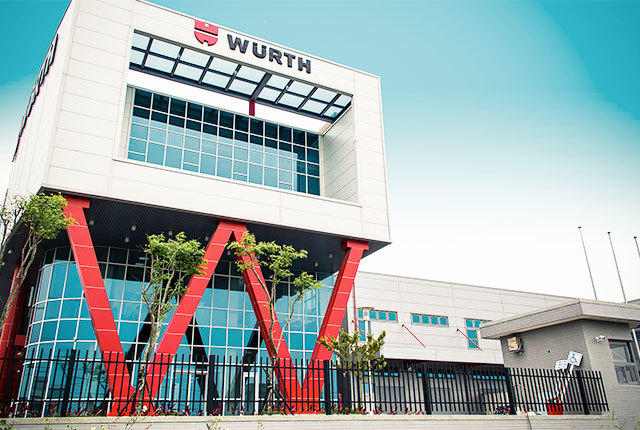 Mix of tradition and innovation

By completing the administration and logistics building in 2016 at the Group’s Taiwanese location in Houlong, Miaoli, Würth laid the foundation for continued growth. Of course it goes without saying that the traditional Würth red is a must for all of the modern and innovative architecture. 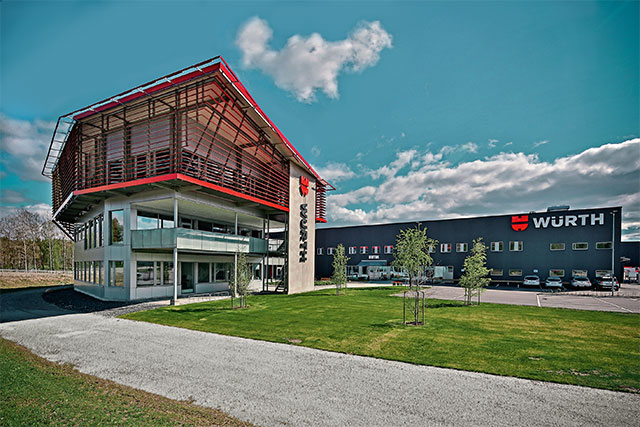 Würth Sweden celebrates its 50th anniversary – and can be extremely proud of its pedigree. In 2015, the company headquarters in Örebro won the MIPIM Award, an internationally-renowned honor for outstanding real-estate projects. 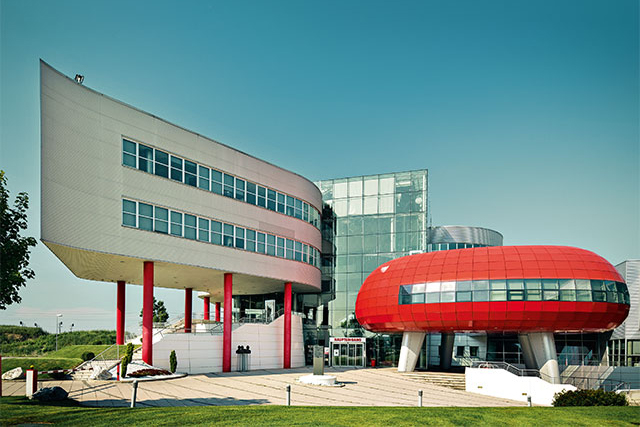 A building that caters to the needs of its employees while at the same time inspiring awe – this describes the headquarters of Würth Austria in Böheimkirchen. The striking silhouette effuses artistic elegance, and even the interior is dominated by dynamic shapes and forms. 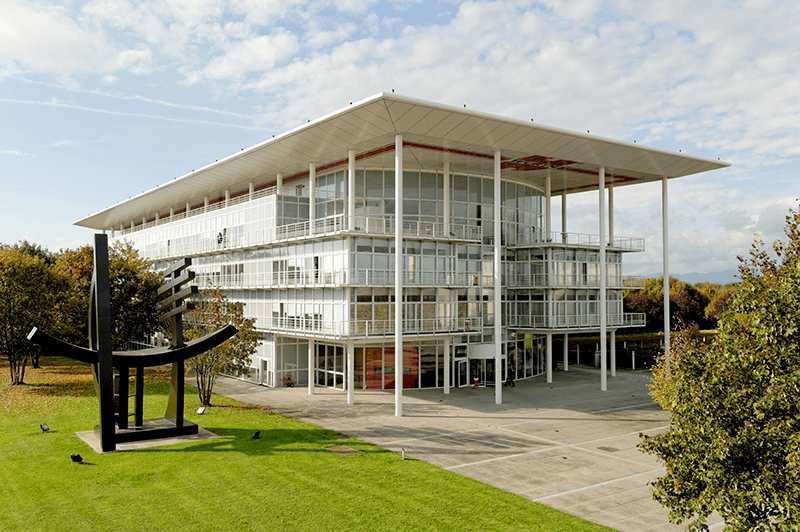 Voilà – An extraordinary piece of architecture

Würth France is among the oldest national companies in the Group. The glass building, which is located in the Alsatian town of Erstein south of Strasbourg features an impressive flat projecting roof that floats over the forecourt like a canopy. Generous gardens inspired by the French garden style complete the overall architectural ensemble. Our French subsidiary is celebrating its 50th anniversary this year.

Another impressive company building in the Würth Group can be found near Sintra, Portugal, where it was embedded into the picturesque scenery by architect Antonio Teixeira in 1992. The building stands for itself: Teixeira knew how to perfectly use the available area and managed to give the building no clearly identifiable front or rear side. 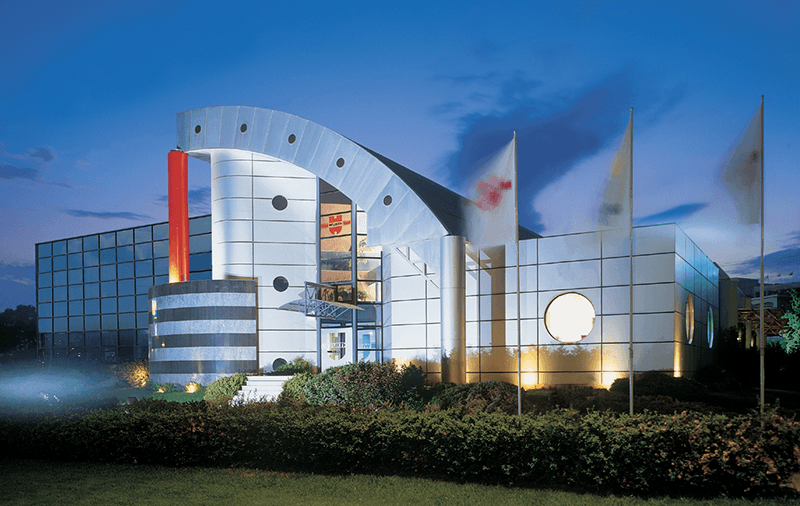 The proud building complex, which was erected in Attica in 1991, still looks amazingly vibrant today. A highly sophisticated structure characterized by contrasting forms and materials. The interior of the semi-circle section is still surprisingly modern, especially the very colorful lobby. Architect Theofanis Bobotis also made sure the Greek offices would have enough daylight.

Palau de Plegamans is a Spanish town near Barcelona. The town is home to the geometrically shaped company building of Würth Spain, which most often presents itself to visitors in the Catalan sunshine. The wide terrace with its triangular water basin is the most remarkable feature of the building, as the basin reflects the basic outline of the administration building. Together, the terrace and building form a quadrangle, reflecting the signature style of architect Caramelo Moyoral. 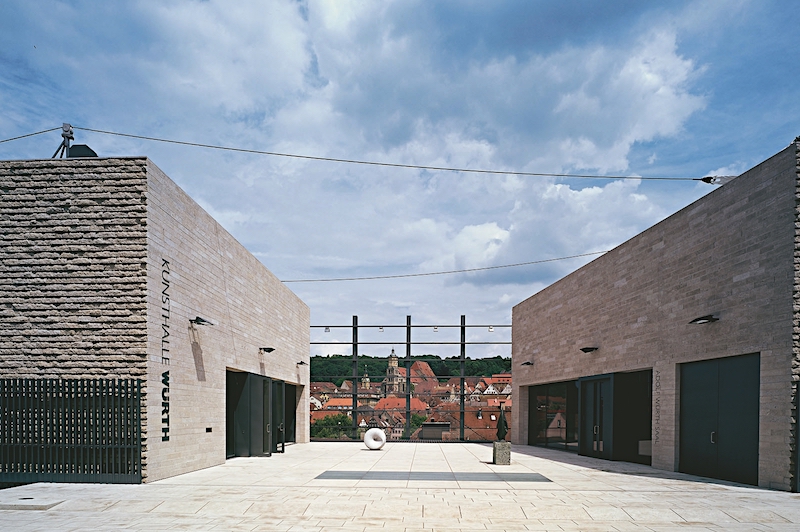 From brewery grounds to a cultural center

The construction of Kunsthalle Würth in Schwäbisch Hall initiated the cultural redevelopment of the entire area on the western bank of the river, setting new architectural standards for the entire region. Danish architect Henning Larsen used the listed redbrick brew house on the other side of the square as an impressive starting point for his composition and he even managed to integrate two floors of the museum into underground cavities below the underground parking garage. The wonderful panoramic terrace created during the construction of the building attracts large crowds of visitors to Kunsthalle Würth in every season of the year. 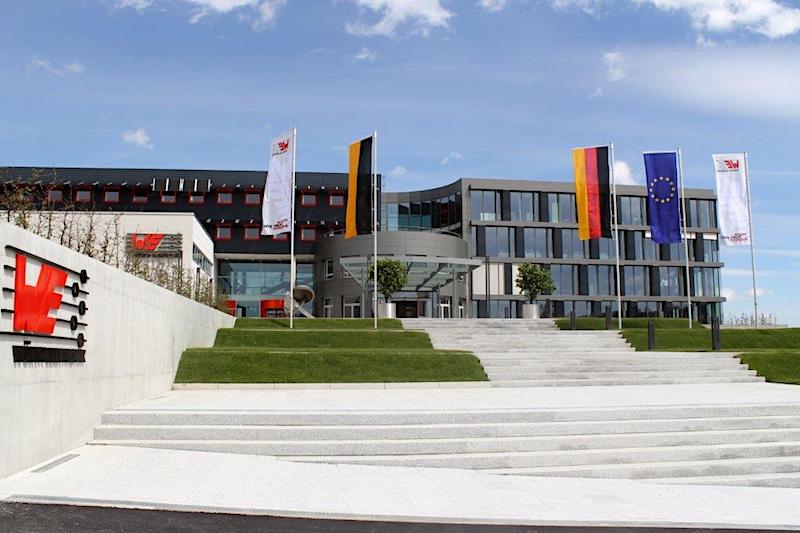 A warehouse that makes you feel at home

The head office of Würth Elektronik eiSos is located not far from the Würth Group’s headquarters in Künzelsau-Gaisbach. It is a combined warehouse and administration building. Stuttgart-based architects Siegfried Müller and Maja Djordjevic-Müller gave the building a lively and above all very accessible design. The entire building complex is harmoniously and unobtrusively embedded into the Waldenburg industrial area. The large metal sculpture by Lun Tuchnowski located directly outside the main entrance, on the other hand, is bound to make an impression. 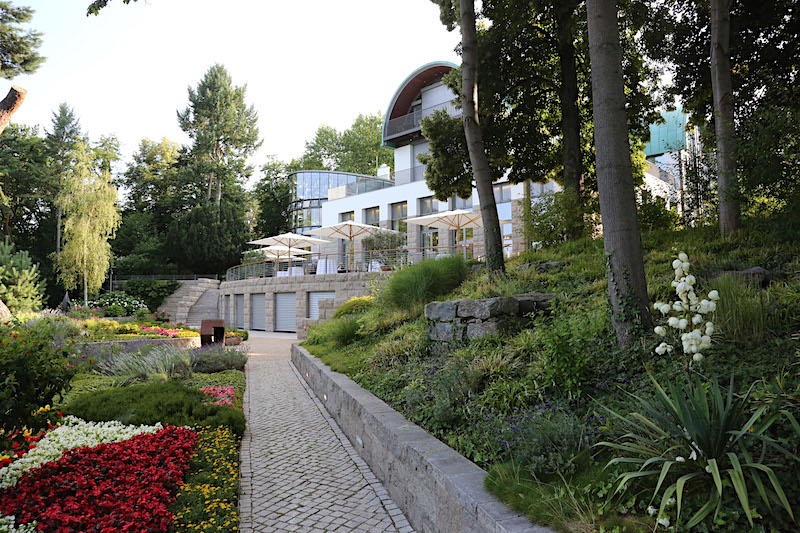 In 2003, the Würth Group opened a representative office in the nation’s capital intended to reflect the internationally operating company’s reputation. The location could hardly be any more spectacular. Located on the Schwanenwerder peninsula directly in the Wannsee lake, the new building was constructed in the middle of an exquisitely landscaped garden full of old trees, a fully restored teahouse and a boathouse at the lakefront. The ground floor of the long glass structure, which is open to the garden on both sides, serves as a lobby for the main event hall. Visitors are welcomed in style by paintings and sculptures by Baselitz, Immendorf and other artists. 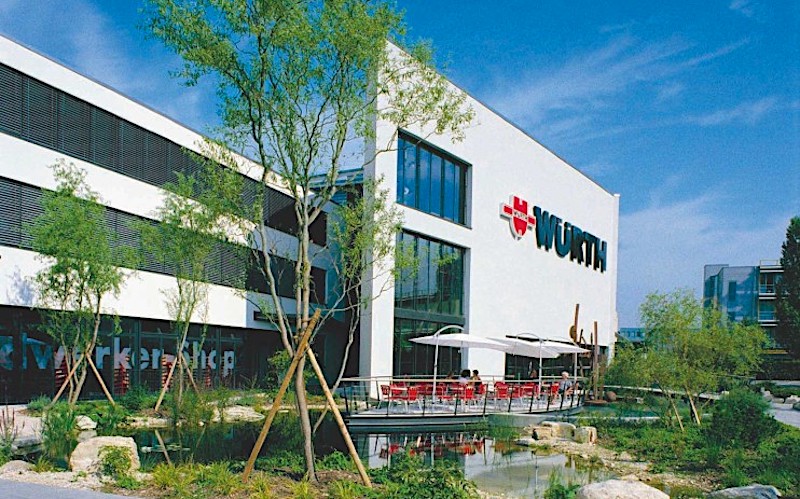 Despite being continuously extended up until the year 1990, the very sober-looking Swiss warehouse and administration building was soon no longer able to meet the company’s cultural requirements. Jauslin + Streber, the engineering company charged with the continuous expansion of the company site, first constructed a twelve-meter supporting high-bay warehouse with a green roof. This turned Arlesheim into a great example of the successful development of expandable Würth company sites. To raise the location to the architectural standard of the other company buildings in the Würth Group, architect Urs Büttiker
created an impressive structural shape which can be regarded as no less than a piece of art in terms of aesthetics and ingenuity. 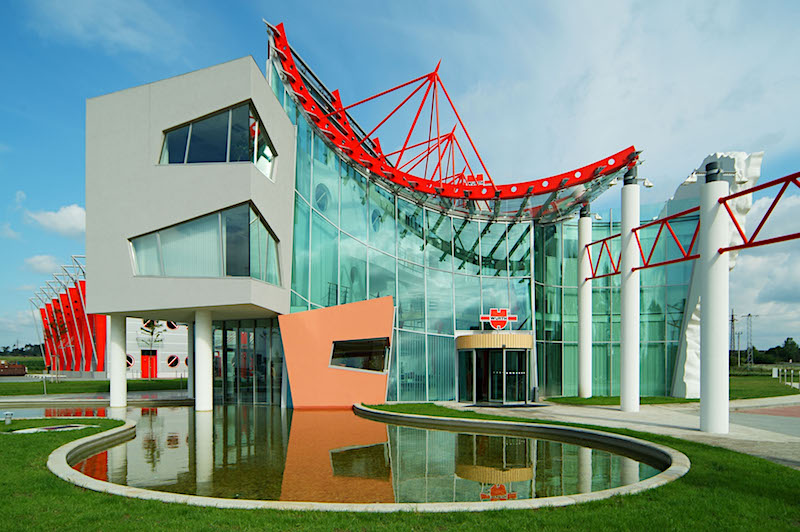 The somewhat unusual Czech company building is a good example of how Würth developed a certain architectural style with artistic ambitions over the decades. The Prague-based architect Roman Roupec considered the use of the color red, the material steel and the playful integration of the company symbols an homage to his clients, which had turned the characteristic architectural style of the Group into an exemplary tradition. 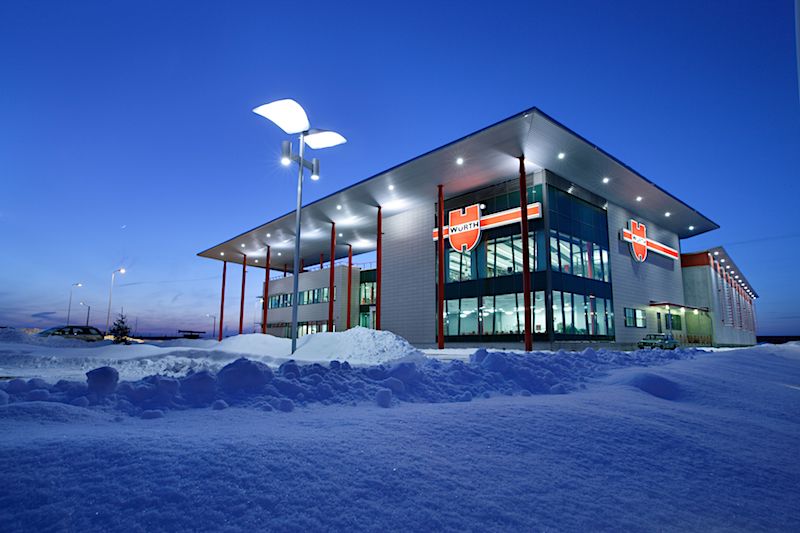 First, there was only farmland, then there was this

About five kilometers from the nation’s capital Tallinn, you can already see the giant red crest of the Würth logo from afar. In Estonia, the visitor is not confronted with trivial architecture. Instead, the local Würth company presents itself with a sophisticated arrangement, whose spirited and rhythmic front section and projecting flying roof lend the building an elegant character. Architect Priit Kaljapulk focused on creating an optimum connection of functionality and comfort. Every large building holds a surprise: The changing rooms, for instance are connected to several sauna rooms and a relaxation room with access to the adjoining rooms of the cafeteria. 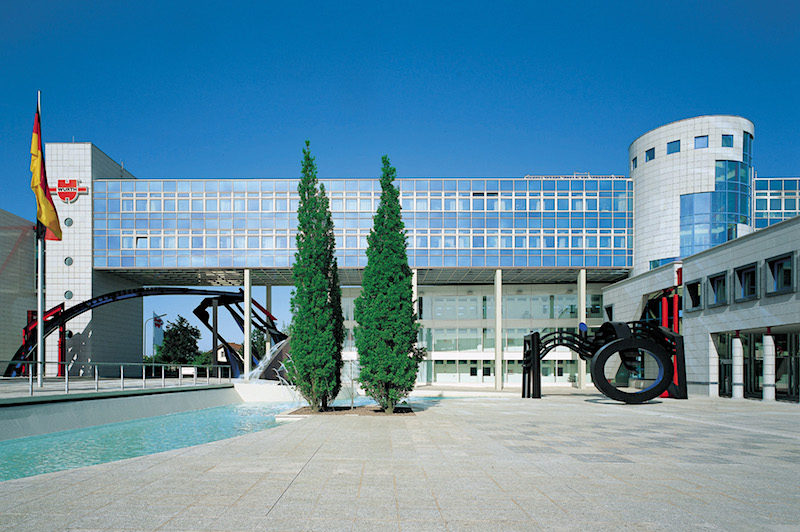 In 1969, the administration building, which had been designed by architect Hans-Peter Sperling, already stood apart from the more traditional architectural styles with its cool aluminum facade and large projecting roof. Only five years later, the renowned architect Sep Ruf set new architectural standards. The four-story cubes made of steel and glass were symbols of his new style. The old pair of buildings was connected to the newer part of the campus with the now characteristic superstructure spanning Reinhold-Würth-Straße. Architects Müller/Djordjevic/Krehl were also responsible for designing the headquarters’ wide open forecourt connecting the different sites and the street and featuring several water basins. The museum, the sculptures and the award-winning building elements give the viewer a good impression of the Group headquarters’ monumental character. 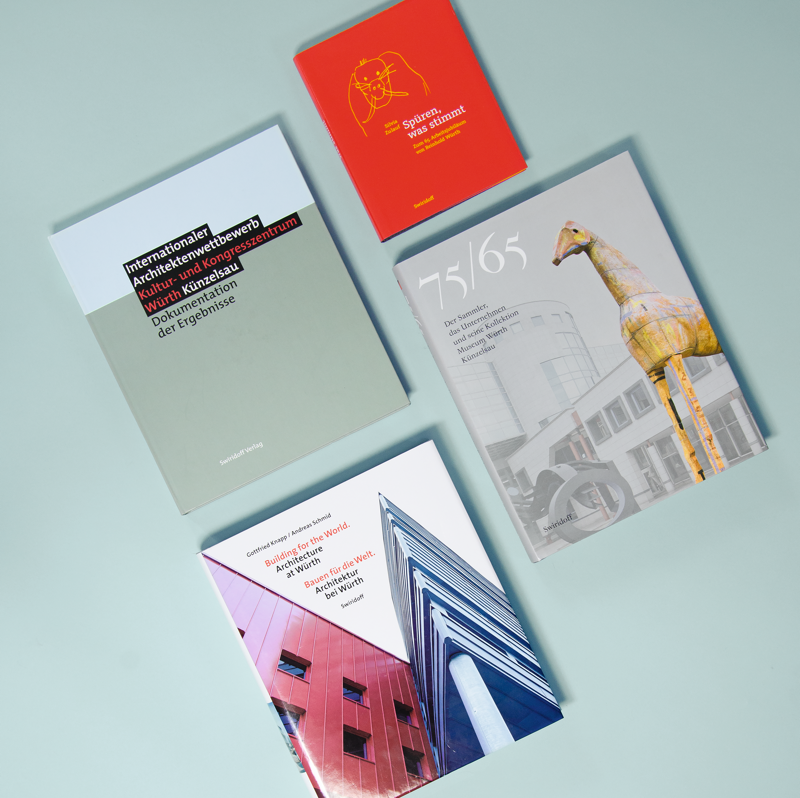 The diversity of the world of Würth Architecture can be admired in „Building for the World-Architecture at Würth“, a book published by the Swiridoff Publishing Company.